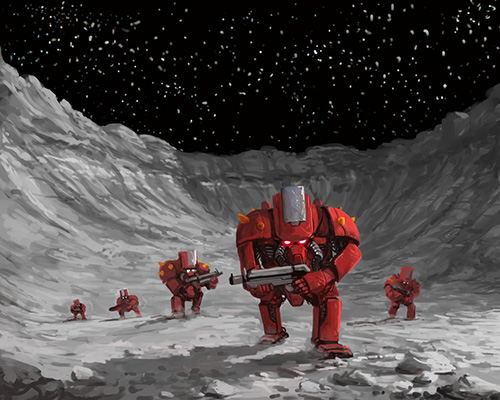 The Red Ant was the first mecha ever built by humanity, introduced by the Illyrian Hegemony in 3087. It is the oldest mecha design still in use today and its longevity in active service is due to the simplicity of the design, low production cost, and durability.

A clash between a pirate warlord and the fledgling Illyrian Hegemony that came to be known as the "Battle of the Markets" marks that day that the Radix Tribe unleashed the power of the Red Ant. Although the mecha were an untested combat unit, they shattered a bandit force of tanks and conventional infantry. Historically, this battle is seen as ushering in the era of “Mecha-nized” warfare.

This new technology was so alien and unexpected that many of the bandits fled without firing a shot. The Battle of the Markets was the turning point of the Illyrian Rust Rebellion, marking the first time the Radix Tribe went on the offensive. With the technological advantage of the Red Ant on their side, they were able to secure the Gateways of several worlds and quickly ward off counter attacks.

Radix Tribe engineers worked on the Red Ant schematics for years before the machine made it to the battlefield. The basic design priorities for the Red Ant included mobility, rate of fire, and the ability to shoot from a distance as well as at close range. One of the most important issues designers had to tackle was how to safely fit a human pilot inside the machine. The cockpit needed to house the pilot/computer interface of the prototype combat A.I., called the Antennae A.I., a cutting edge technology at that time. Only a small percentage of people are able to interface with and operate the combat A.I. and they are the lucky ones who become mecha pilots.

The human-to-computer exchange that occurs when piloting a mecha created new possibilities that increased the impact of an individual pilot in battle. A single trooper could now harness the firepower of an entire squadron of combat vehicles in a solitary machine. Mecha can bring multiple weapons to a battle and fire them in close succession, which has devastating results. This is one of the major advantages displayed by the new fighting machines over their tank driving foes in the Battle of the Markets.

The Red Ant’s Antennae A.I. programming adds a considerable enhancement to the pilot’s aim and yields a much greater percentage of successful hits over manually controlled targeting computers. The Antennae can also control up to three custom modules, allowing a pilot to reconfigure the mecha simply by installing new software.

A Niobium-laced crystal matrix was selected to serve as the skeleton for the Red Ant and it conveniently also functions as a power distribution and amplification system. Crystals were widely available in the Radix Tribe’s territory at that time, so this design proved to be both economical and strong. The Illyrians learned to farm the crystals to ensure they had a steady supply of materials to build these new war machines.

The crystals are natural superconductors and when aligned in the Niobium matrix, they function as power amplifiers. This unique chassis design provides a massive power boost to Laser weapons, increasing their damage potential at growing rates as the mecha receives upgraded components.

The Red Ant’s Niobium-laced crystal matrix provides ample power from the central power plant to the motive systems as well as the weaponry systems. This gives the Red Ant a much greater rate of movement and rate of fire than the tanks that preceded it. This package leaves little room for additional engine modules, yet the power distribution and laser performance in the Red Ant has yet to be matched by any larger crystal based mecha. 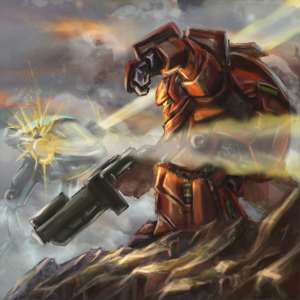 Defensive systems for the Red Ant include heavy armor and an array of energy shields mounted to the external frame to absorb or deflect incoming fire. Specifically tuned shield pods provide additional protection from the most common weapon systems (Lasers, Projectiles, and Missiles). Three slots for heavy shielding modules enable the pilot to tailor their machine to counter other threats.

Many a hot-shot pilot got their start in a second-hand Red Ant. While this mecha often gets put into storage as a pilot learns to maneuver larger mecha, the Red Ant is an invaluable asset for scouting and reconnaissance missions. The lightweight design is often deployed in terrain that is impassable to larger and heavier mecha. The Red Ant is the first in a long line of combat vehicles with agile movement designs that have made many conventional designs, including wheeled and tracked motive systems obsolete.

For more info, check out the Red Ant lore on the Mecha Galaxy ANN news site. 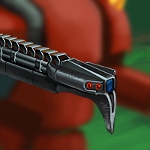 Fires two low powered red lasers. The viper laser began as a hand cannon for soldiers but was upscaled to be used in Mech battle.

If purchased individually, these weapons alone would cost:
10 Ferrite
8 Bioptics