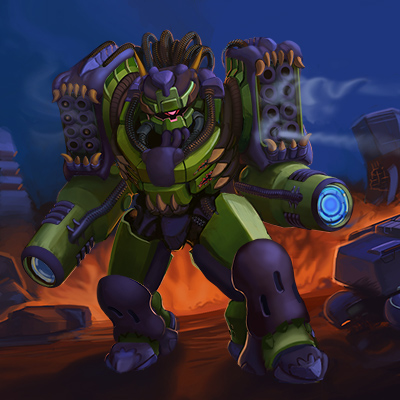 The Banshee mecha has an exciting story that began in a factory in the Society of Cogwerk Planets, but it was not the Cogwerk pilots are familiar with… The “mutant mecha” are Drochah’s creations. They are products of a divergent timeline that was created accidentally by Drochah’s time travelling.

In the aftermath of the first incursion by Drochah in 3286, the human race became much more aggressive in their defense against his attacks. The human beings in the other timelines were not all fortunate enough to succeed in exiling Drochah. While the Forerunner was defeated by the mercenary clans in our timeline, he prevailed elsewhere.

With an entire Galaxy at his disposal, he set out to build an army that could succeed where others had failed. With his thralls and willing servants placed as overlords, he enslaved the rest of humanity. The scientists and engineers were put to work designing new and better versions of the mecha that had defeated him. No longer needing research into medicine or exploration, Drochah set thousands of researchers to the task of bettering his military might. Eventually his new arsenal of destruction was completed.

New and larger versions of the mecha we know were created. Strange and powerful weapons based on Forerunner technology made them even more deadly. The “Alien” look of the mecha is the result of an advanced Niobium/Ferrite alloy that is bonded at the molecular level. The result is a more effective armor plate than what was previously manufactured in our timeline. Every aspect of this mecha is the product of an entire galaxy at war.

During the turmoil and chaos leading up to Faction Wars 3314, Arnold Bennington and Genghis Khan used the jungle moon Rizpah as a staging area to bring the might of the League of Ages against the Galaxy. Drochah’s minions took control of Rizpah and eliminated anyone and anything that got in their way. They used a powerful and highly coveted artifact, the Chroniode to summon their armies from their secret lairs.

Unbeknownst to them, the Chroniode also linked the Gateways on Rizpah to the same locations, creating a rift in time and space. These unstable gateway paths were linked to worlds not in our universe…

This rift quietly deposited dozens of Banshee mecha into the jungles of Rizpah. While the mercenary clans were chasing Genghis Khan, the first Banshee mecha was discovered. The “mutant mecha” was delivered to Trinitarian research facilities for examination and analysis.

The Trinitarian Symposium was the only mecha manufacturer with the knowledge of Cogwerk missile manufacturing and the facilities needed to complete the project. Initial reports concluded that this mecha is similar in capability and construction to the majority of Cogwerk designs. Taking a few weeks to decipher the foreign aspects of the mecha’s construction, Symposium scientists were able to reverse-engineer the components needed to manufacture the Banshee.

The Banshee's design is centered around missile systems and it enhances the area effect attacks common to these type weapons such as Splash and Fork. After the first several series of upgrades, it becomes a dual role unit, adding ice weaponry damage boosts. Signal jamming programming becomes activated, as well as additional offensive bonuses to direct attacks.

Since the engineers could not manufacture the alien components, they built copies using our technology. For the A.I., designers used the base programming from the Katyusha A.I. that was so successful in the Orester. As with its predecessor, the Trinitarian Model 7 A.I. is very effective at grouping missile flights to achieve maximum damage potential. The Model 7 also contains a considerable amount of programming dedicated to secondary targeting systems to boost the area attack Splash effect of many missile systems. Fully upgraded, the A.I. will also generate a full power Fork attack on a target near the primary adversary nearly one out of five attacks.

An uncommon feature of the Model 7 is a shift of focus at mid ranges of upgrades. A lower priority is given to missile systems and ice weaponry becomes the primary feature. Fully upgraded, the Banshee generates significant boosts to ice damage, making it the lightest mecha to feature ice as its main weapons focus.

For offensive electronics, the Model 7 carries an array of EMP generators to disrupt the circuitry of an opponent and force them to shut down and restart. A target analyzer continuously scans the target for a weakened armor plate to direct fire into for a one shot Crit-Kill. Three ports are included on the A.I. for the pilot to add custom equipment.

The Sledgehammer powerplant was selected for this mecha because of its compact size and reliable function. This smaller but no less powerful version of the Cogwerk Steamhammer produces enough power to propell the Banshee at speeds of +25 over combat optimal, making it considerably faster than many of the other small mecha.

The majority of the chassis space is dedicated to ammunition bins for the missile launchers, shielding modules, and chassis equipment. Power not used by the motive system is directed to the weapons systems to create overloads. The Banshee pilot can expect a double-powered salvo on up to a fifth of shots fired.

The chassis of the Banshee contains molecularly aligned Niobium, making it sturdier than many other light mecha. Three ports are provided for the addition of mission essential equipment along with a pair of slots to house heavy shield generators.

The Trinitarian Symposium started producing the Banshee in 3313, just after discovering the first model on the jungle moon Rizpah. This mecha is an advanced model, clearly the result of millions of man hours spent creating an optimized model in the other timeline where Drochah created it. The mercenary clans are strengthened by the new technology it carries and are better equipped to keep Drochah at bay.

These missiles are built to deploy a secondary set of charges that can damage nearby mechs, a good way to keep improving your arsenal.

These missiles are built to deploy a secondary set of charges that can damage nearby mechs, a good way to keep improving your arsenal.