Armed with a vicious sting, the Orcus is a highly maneuverable mecha that is prized for its swiftness and range of attack. After the Fides, it is one of the most sought after machines on the black market. The unique claws on its legs allow it better purchase on the ground for running and climbing, while the back mounted weapons can rotate 360 degrees. You will often find Orcus mecha used in the illegal Niode Matches, where pilots fight for prize money and fame.

The Shogunate will often send small units of fast Orces Mecha at the start of a fight to roust out the enemy and then fall back into position, firing shots as they retreat. This method has been proven most effective against the lesser organized Cogwerk forces, who do not have traditional military training and are more prone to panic under attack.

Among the 35-Ton Mecha, this is the one that will define a budding commander's army by speed, both in firing intervals and by bonuses to the already blazing cannon weapons. 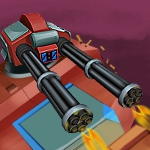 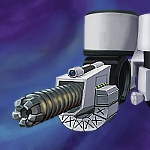