At the heart of the Redeemer lays the Moebious power plant. Originally a civillian model capable of providing all the Power a city of 250 000 people, its industy and utiliities. The energy output is huge, but the ingenious way is how it is handled. Any excess energy is stored in a superconductor wheel, avialible to be tapped at a moments notice. Some of the energy is shunted to overload capacitors.

Here the design team ran into a snafu.

Originally it was supposed to have seven capacitators capable of boosting damage by 50% and five for tripling the damage. The bigger capacitors were no problem, but for the smaller the differences between parts of the multiverse became evident. Two manufactorers were tasked to provide one inch capacitors, but while one made the standard 25 mm capacitors, the other used imperial inch (25.6) mm. This resulted in some of the capacitators now delivering a 60% boost instead. Shrugging their shoulders and noticing this gave potential for even more damage the design team moved on.

But more of the power is dedicated to increasing the speed of the Mechs Cannons. Fully developed the added kinetic energy is estimated to boost the projectile damage by a staggering 130%.

But at heart the Moebius powerplant is civillian. Created to withstand earthquakes, cave-ins and temperatures ranging from -80 to +90 centigrades it is not suited to real extremes of temperature. So any significant drop or increase in temperature, as one get from being hit by Ice or Fire weapons, will result in power fluctuations and cause additional damage.

No 105 tonner is especially fast, but the Redeemer is among the fastest yet designed. When it reaches its full potential its inbuilt speed is decent, and it will have room for eight additional engine modules to make it a fast mover indeed.

The Styrix battlecomputer is another inovative design. Based on probability enhanchement and intuitive targeting it give a significant boost to Precision for the onboard weapons. These hits are calculated to strike at vulnerable spots, and it is estimated that every tenth hit will result in a mission-kill. As if this wasn't enough, in addition it have room to accept eight additional Cockpit modules.

No design teams can shake off its ingrained beliefs.

In the Multiverse the biggest threath to Mechs are considered to be the fast and deadly Missiles. To counter this the design team turned to bioscience.

Out of the way in the galactiv rim there had decades in the past been found a lone barren planet circling a neutron star. On this planet was some lichen that had adapted to its envirionment. Normally bereft of lifegiving solar rays, it was occationally hit by a really powerful pulse of high energy radiation. Research on this lichen had proven that any high energy beams were absorbed, up to a degree. This included, but was not limited to; Laser, Radar and Lidar. By adding some of the native rock to the Redeemers armor the lichen could grow on it. The Shield was specifically excluded. The resulting effect was that missiles onboard seekers would focus on the Shield, and as it was a smaller target about 3-in-5 missiles would just streak by. This work to a lesser degree for other targeted attacks like the Fork and Splash effects one can encounter on the battlefield, and the lichen will also absorb much of the energy from Laser strikes.

In addition a dedicated shielding generator and a couple micro railgun emplacements give added general protection and swipes even more incoming missiles from the sky. Having all these details built in, the shielding modules can not support more than five add-ons.

As the design team felt it was better not to be hit than to deal with damage they reserved space for seven Chasiss modules to give the Redeemer a high degree of maneuverability.

Redeemer comes fully equiped with:
Culverin cannot be unequiped from its mech 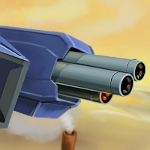 Fast an lethal. When you've only got time for one shot, make it count. 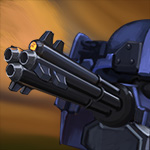 With each shell fired, unleash a shockwave that disables opponents.

With each shell fired, unleash a shockwave that disables opponents.

Compact and packing more punch than previous cannons, this model can deal double damage if the timing is right.

Compact and packing more punch than previous cannons, this model can deal double damage if the timing is right.