Years after the last frantic all for help, the Craftsmen of our Galaxy was yet again contacted by their alternate selves in another Galaxy.

Droch`ah had found his way into that Galaxy, and was beginning a campaign of conquest and subjugation using materials and techniques that made the might of that Galaxy`s armies powerless to stop him.

As unit after unit perished while buying some time for the desperate evacuation of civilians from world after world, it became clear it was just a matter of time before Droch`ah would be the undisputed master of that Galaxy, and humans would have the choice between death or servitude.

That was, -unless some equalizer could be found.

Our Craftsmen was of course willing to help. Technical data and blueprints for improved Mechs, Equipment and Weapons was the first gift sent over.

But what was lacking was the experience of those who had faced Droch`ah in other incarnations, and not merely survived the experience, but actually triumphed over his forces.

So yet again the call went out. Who would be willing to transfer their consciousness to another body, in another Galaxy, to put their fragile selves between Droch`ahs near unstoppable might and those he sought to enslave?

The Mercenaries yet again rose to the challenge. First a few, then dozens, scores and hundreds of them crossed the vast gulf and found themselves somewhere almost like home, but still alien.

As they started a crash course to get their old skills into the new bodies, the industrial might of that Galaxy started putting heavier Mechs, better Equipment and more powerful Weapons at their disposal.

That galaxy`s Craftsmen decided to reward those who championed the cause, and construction of a new class of Mech was undertaken.

In recognition of the protective nature of those who had come to ward them from evil, the Mech was named Warden.

Compared to the other Mortali Gustore Mechs, the Warden is somewhat lower and have a more boxy appearance. Another difference is the lack of a shield.

The AI chosen for the Warden is the Tal-2X. Having a set of multiple processors and an immense memory bank where all fights are stored, the Tal-2X will choose the appropriate way to handle an opponent based on previous encounters and tactical considerations.

Even unaided the Tal-2X have a decent probability of hitting an elusive target, and can generate a mission-kill by nearly every tenth shot. But to further enhance its capabilities there is room for up to six additional targeting modules.

The power plant is an crowning achievement of engineering. Exactly how the Enigma II manages to generate the immense output it does is hard to explain. What is of interest to the pilot is that instead of generating power and waste heat, is that it generates power and cold. The cold is shunted toward the weapon launchers where it in addition to keep them from running hot, will eventually double the output of all Ice weapons.

Much of the power is led toward overload capacitors, of which the Warden have four sets. 1.5X, 1.6X, 2X and 3X. If all of them can be coaxed to release their energy at the same time, a massive blast doing more than 14 times the original damage will be unleashed at the target.

But quite a lot of power is also devoted to the Engines. The Warden will eventually have room for eight Engine modules, making it potentially one of the fastest Mechs in existence.

The Warden is not only about offence. Its defensive capabilities is quite impressive as well. While opponents main boards will find it readily enough, the shielding module will mislead approximately a quarter of any secondary strikes into false targets. The shielding module will also turn impotent all but very powerful attacks, and will eventually have room for six additional modules.

To further help it evade incoming fire, a fully developed Warden will also have room for up to eight Chassis modules. This will let a pilot customize it to meet mission parameters. Whether to enhance the evasive or the offensive aspects is up to the pilot. 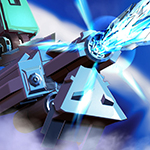 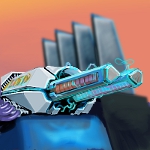