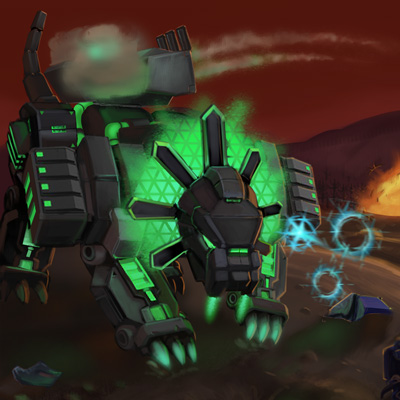 As the tonnages of the deployed Mechs went stedily upward, the ruling Council of the Legionares of Galactic Trade gathered for a discussion of policy.

Just using what Mechs they had would lead to stagnation of their forces, and as time passed make them more and more vulnerable, so the question was whether to purchase some of the newer Mech models, or develop a superheavy model of their own.

As they already had a galaxy class R&D establishment, and none of the newest models was exactly what they were looking for, they decided to make a new model. Besides. Revenue in from sale of Mechs, was much prefered to Revenue out for purchase of Mechs.

The design team was given the task of creating a Mech that had top protection, could handle multiple opponents and be useable in the Ffeld without needing months of upgrading first.

Drawing on the two latest successful designs, the Onyx and the Spitfire, the Legionnaires design team came up with a Mech that blended the best of the two of them into a truly formidable force.

Even though all Mechs are configured for combat as they leave the factory, most Commanders want to get some upgrading done before new Mechs are integrated into an existing formation.

This especially holds true for the higher licenced Commanders and the heaviest of Mechs, as the violence of the battlefield leaves factory-fresh units at a severe disadvantage due to weak or nonexisting protecition.

The Spectre however is created to be reasonably survivable from an early point. After just four upgrades a Commander can add two Chasis modules to the Mech, and depending on what modules are chosen this gives it reasonable odds of taking on for instance a 65 ton Buchis who have gotten ten times as many upgrades

As the name indicates the Spectre is a stalker. Much effort went into creating its dual purpose defensive suite, the Rowler.
It has two modes, Pursuit and Guarding.
The first mode is the P-Rowler. Special foot actuators let it move through terrain giving off a seismic signature belonging to any Mech it choses down towards half its own tonnage. Active camouflage and fake emission signatures help to back up this duplicity until its prey is well within engagement range.

At that point the duplicity is dropped, and the protective G-Rowler mode is brought to life. Using a combination of audio and electronic emissions it disturbs the opponents targeting solutions. The Rowler can fully developed be further enhanced by eight additional modules.

To power the Spectre, many of the best features of the Onyx` Daemon powerplant and the Spitfires Cogwerk Stirling Cycle were crammed into the new Black Tulip powerplant.

Forgoing the much used overload capacitators, much energy is instead shifted into boosters for the Missile launchers. This assures any missile salvo launched from the Spectre will deliver damage nearly up to twice of what is standard.

While the Spectre can get up to a decent speed unaided, the Black Tulip powerplant will eventually have room to accommodate eight additional engine modules, increasing the speed enough to let the Spectre keep up with all but the fastest Mechs.

The crowning piece of the Spectre however is its powerful Gemini A.I.

Taking a leaf from the Spitfires Sagittarius A.I. It keeps an eye out for opponents standing close enough to be engulfed in the same salvo. The Onyx`s Black Lotus A.I. gave inspiration to the use of Anti-Mech software, and the Lishte program will cause a noticeable degradation in any opponents firing speed. However the main inspiration from the Black Lotus was in the multitargeting solutions.

The Spectre has the highest odds of any known Mech to achieve a line shattering Wide Fork. About two out of nine hits will engulf the whole line of opponents.

When one also consider that both the Splash and the Fork algorithms will engage the prime targets neighbours 3 times out of ten each, the lethality of the Spectre is brought into stark focus.

Here it is a question if it isn't actually safer to be the Spectre`s Prime target than to be in the vicinity of it.

Of course, being the primary target have a serious drawback. Even if one should survive the hit, the Spectre`s insiduious viruses will have slipped into the target Mechs data streams. As the most effective virus package so far made for the BFM/UHM classes, they will reduce the speed of any return fire towards an inefective crawl.

To achieve these hits, the Gemini A.I. also have an standard target finding mode to get a lock on in the first place. While it is pretty good unaugmented, its targeting solutions will get much better when connected to the additional six modules it can support.

Acknowledging the need for serious defenses, the Spectre also devotes a significant percentage of its energy flow towards shielding.

It has the strongest general shields so far made, more than 50% more effective than what its closest competitor, the Xhango have.

But that is not all.

The Harmonic Jamming Shield will by itself degrade all incoming direct fire by 10%, and it will eventually have room for another seven shielding modules, making the Spectre one of the best protected Mechs in existence.

No Mech, at least none of the bigger Mechs, is complete without room for some serious mission dependent alterations. The Spectre have some inherent Dodge already, and this might easily be increased toward the maximum effectiveness by a judicious selection of chasis modules. The Spectre will eventually have room for up to eight of them. 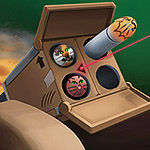 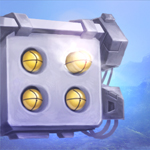