Project Penner, as it became to be known, was the brainchild of long time mecha pilot, Mark Penner. Years, even decades, of data collected from the battlefields of the galaxy and analyzed through the eyes of first-hand experience led to the design of this Ultra Heavy Mecha.

It began rather humbly as a series of sketches, doodles, “what ifs”, and “wouldn’t it be nice to have” ideas added into after action reports and mission evaluations.

Over the years it became more of an outline for some possible modifications to existing design to eventually a full fledged blueprint of its own. While the theory of this new fighting machine was sound Mark, or even his entire clan, did not possess the necessary heavy manufacturing equipment to construct such a machine. As it happens, as these things usually do, Mark was waiting to meet a representative from the Schwarzbär Collective in the Illyrian Hegemony about a possible job and was working on some details in his notes. So engrossed in his work he did not notice the approach of his prospective client until the representative who had arrived and was observing offered a bit of advice on the placement of a piece of equipment. The rest, as they say, was history. After some negotiations about production and the like the Schwarzbär Collective quickly began retooling one of their assembly plants for the production of the Penner Mecha.

The Ultra Heavy Mecha is designed around ultra heavy firepower. It relies on the rapid rate of fire that is prevalent in Projectile weapons systems as its primary focus. To maintain this high volume the Penner was designed to support the most rapid advancement of weapon system support of any mecha to date. As the mecha is upgraded the A.I. will be able to control an additional weapon every 2.5 levels on average. The rapid increase of weapons keeps in line with the overwhelming firepower focus of the Penner. Even the factory installed weapons are designed to make the Penner a serious threat as it walks off the assembly line. A Nightmare Device cannon is mounted as the primary weapon along with a Whirling Barrels. These massive guns have a pair of Battleship Turrets to back them up.

The A.I. constructed for this mecha is the Obsidian Omega. It too, focuses on Projectile weapons. Fully upgraded it will enhance the output of cannon type weapons by just shy of a 100 percent increase. Target analysis scans for weakened armor plating or exposed joints to exploit with precision fire. A 12% boost to hit an enemy mecha adds to solid a baseline of 10% Crit-kill built in to the cockpit. Both of these factors can easily be enhanced with the additional equipment that can be placed in the eight slots provided.

Being the first Ultra Heavy Mecha, not to mention the first Niodes design, constructed by Schwarzbär an entirely chassis was required for the project. The Black Bear type 7 Thunderwalker was developed for the project. This extremely durable chassis design provides ample room for the massive power plant without the need to short the design of shielding or other modules such as the five Msd-Bot units integral to the inner workings of the Penner. It is also built of a magnetically neutral alloy to defeat some types of targeting locks thereby enhancing the Dodge capability of the mecha. Seven hardpoints are included for the installation of additional equipment.

The Shielding included for the basic design begins with multiple shield pods mounted around the Chassis. Fully upgraded these will absorb 150 points of damage from any source. As a countermeasure Reflect Shield units will return 14% of all incoming fire back at its foes. Six ports for heavy shielding modules give the mecha the capability of mounting a full pentagram of overlapping shield types. This configuration reduces any vulnerabilities from any one shield type and still leaves a place for an addition module as may be required by missions.

A Nueranium Generator powers the Penner at Speeds approaching combat optimal, once it is fully upgraded. Fully eight additional modules can be added to further increase the Speed of the mecha. The Nueranium Generator is also well equipped with multiple banks of overload modules to direct excess power to the weapons systems. With each rated at 30% the Penner will see 1.3X, 1.5X, 2X, and 3X overload singly and in varying combinations at frequent intervals.

The Penner mecha bears its namesake’s omega device proudly on its shoulder as a badge of honor. There is no doubt this machine will dominate the battlefield for generations to come. 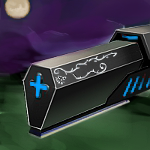 No escape. Nowhere to hide. It’s worse than your enemies can imagine.

This versatile cannon can use improvised matter as ammo. Fire fast, reloads faster. 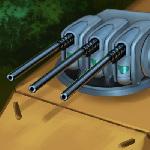