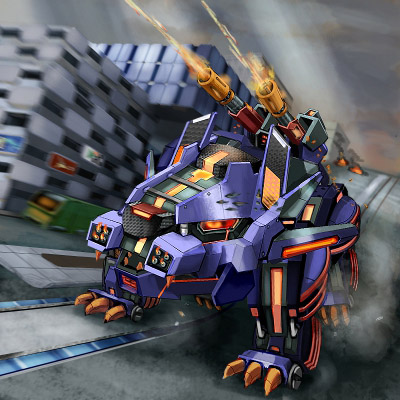 The inspiration for the ground-breaking design of the Smilodon came from the nightmares of a Meiji Shogunate engineer's young daughter. She dreamt of a great beast that would slay anyone who approached, leaving many fallen warriors along its path. Now, the Smilodon inspires nightmares of its own.

At the time of its creation the Smilodon was the largest mecha in existence. It is still one of the most feared. The technological advances pioneered by this design keep it at the forefront of mecha design discussions. During the early years of its deployment, the Smilodon was repeatedly seen destroying entire formations by itself. Even today many pilots will avoid direct combat with a Smilodon unless they have considerable reinforcements.

The Genbaku A.I. mounted in the Smilodon is in a class of its own. Designed to be a headhunter, the Smilodon is often sent to neutralize enemy command mecha. To quickly destroy multiple targets on its own, the Genbaku utilizes a key piece of its processing power to analyse its prey for any exploitable weakness. The rate of Crit-Kill shots fired by a Smilodon is higher than nearly all other mecha, including much newer and larger machines. The Smilodon is the first mecha with this ability available when it steps off the assembly line. Secondary targeting protocols controlled by the AI direct area attacks at any opponents in the general vicinity. The Genbaku can control up to five upgrade modules. With the right set of custom equipment, the Smilodon can execute a Crit-Kill in nearly one in three shots fired. 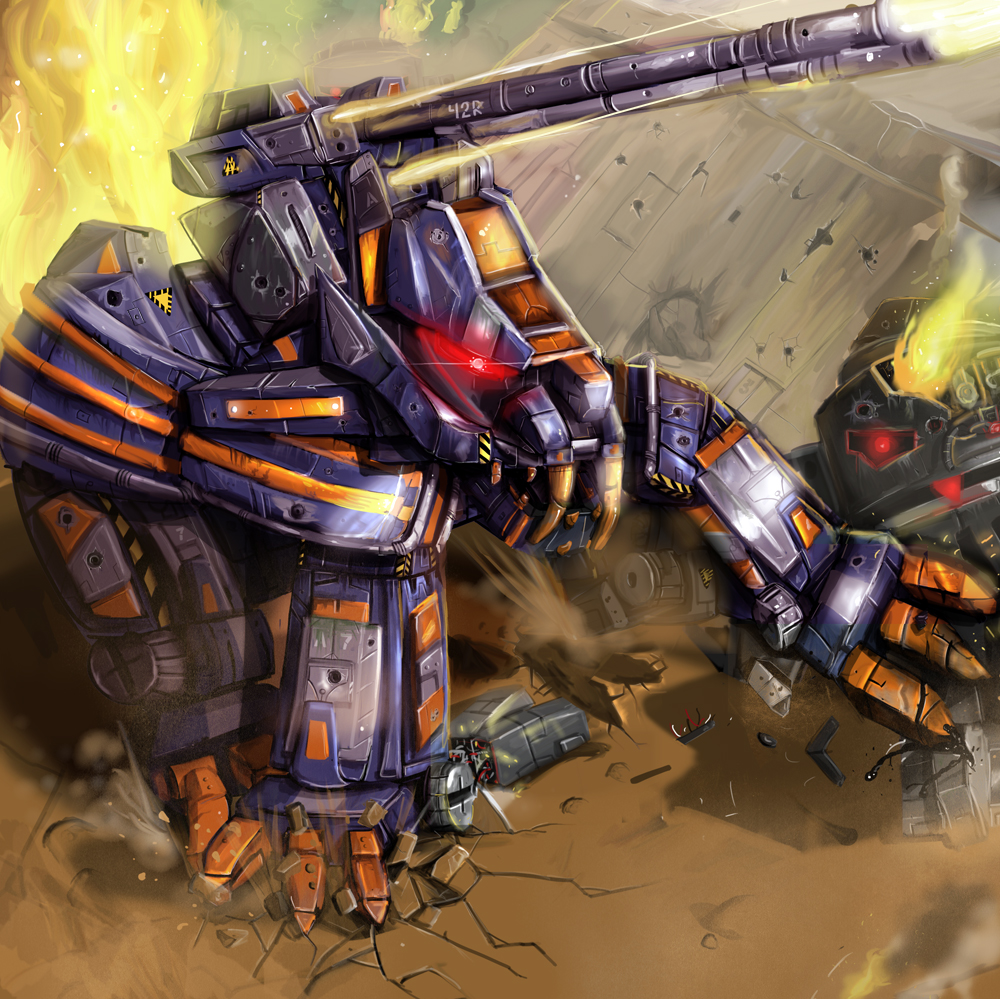 Powering the Smilodon is the sleek Kenada Fusion Plant. Even before any added equipment, the Smilodon is remarkably fast and can maintain a higher rate of fire than any other designs in the heavy class of mecha. The Kenada directs a great deal of power to the weapon systems as well. The Smilodon keeps its weapons in a constant state of overcharge to generate damage greater than factory specifications. Several large overload capacitors complement the weapons suite and enable the Smilodon to create triple-powered blasts for any weapon it carries. Highly adaptable, the Kenada carries five ports for custom equipment giving the pilot hundreds of possible power configurations.

The chassis and motive system of the Smilodon is also unique. While there are several multi-legged mecha designs, the Smilodon’s engineers chose to approach movement with a radical departure from the popular Tetrapod and Hexapod motive systems. They envisioned and built the groundbreaking Predator type movement configuration, a design that quickly proved it can support the Smilodon’s impressive Speed. Nicknamed the “Battle Cat” by pilots, this mecha is a quick and agile adversary. The chassis is fitted with three slots for the addition of custom equipment. For defense, a pair of heavy shield mounts and a pair of self-generating shield pods are installed to provide some general protection against incoming fire.

Lightning fast and exceedingly deadly, the Smilodon is favored by high-ranking Shogunate pilots for its aesthetics and superior performance. Rumors have been circulating for years that the Shogunate military is secretly testing an updated model of this design, but for now, the Smilodon's dominance of any battlefield it enters is nigh-unparalleled.

The Shogunate High Command knows the value of the Smilodon; since its initial deployment, Alpha Corporation has been ordered to keep a dedicated research and development team assigned to keeping this mecha at the cutting edge of performance. In the early 3300’s, Alpha Corp’s engineers completed an update package for the Smilodon’s systems that significantly extends the mech’s abilities.

Primarily offensive in nature, the update served to showcase and reinforce the mech’s deadly reputation. Several processors were added to the Genbaku, providing a boost to the already fearsome Crit-Kill probability of the mech. The secondary targeting system received a generous enhancement, increasing damage caused by Trample attacks. New high transmission superconductors increase power flow to the weapon systems to generate increased output regardless of weapon type. Several shield pods were added to the frame raising the amount of self protection created by the Smilodon. 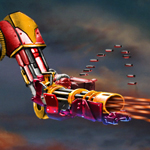 A relentless hail of dense ferrite rounds can completely overwhelm weaker opponents. Nowhere in front of it is a good place to be.

A relentless hail of dense ferrite rounds can completely overwhelm weaker opponents. Nowhere in front of it is a good place to be.