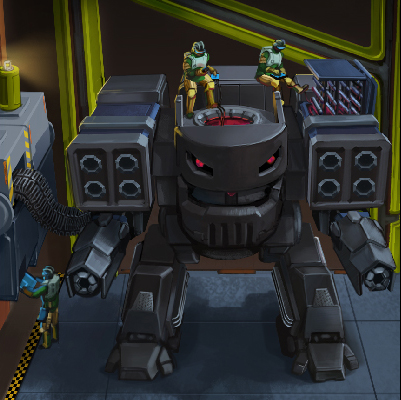 The Trinitarian World Symposium produces the Orester with an alloy that’s widely available on the Cygnus Arm mining worlds. Due to the unique formations of strata found on the worlds containing the alloy elements, this alloy has special thermogenic properties that accelerate heat expansion while maintaining density, resulting in a sturdy chassis and heavier armor than other mecha of its class.

Designed as a heavy bombardment unit able to engage multiple targets, the Orester’s shoulder-mounted missile arrays are very effective at distributing missile fire and secondary splash damage. This mecha is fitted with a Katyusha class battle computer that focuses on maximizing the potential of the missile weapons carried by the Orester.

The Katyusha’s tracking programs are designed to enhance missile weapon systems damage output above expected rates. Area-effect targeting algorithms also enhance that same capability built into many common missile systems. The ballistic targeting features are effective on projectile systems as well, although to a lesser degree. The Katyusha battle computer can control four add-on modules, allowing the pilot to make significant improvement to the offensive electronics package of the mecha.

The Orester is powered by the Symposium Gaslight series power generator. Built to keep running even after suffering severe damage, the Gaslight will occasionally send a surge of power to the feed mechanisms for the Missile launchers that enables two full flights to be fired nearly simultaneously.

This durability in battle has its drawbacks and the Gaslight has been described as bulky and underpowered as it comes off the assembly line. To compound the lack of sufficient power, the onboard programming directs energy to the weapons and A.I. at a higher priority than the motive system. As custom equipment is added, the Orester’s generator struggles to maintain the motive systems at peak efficiency. A standard trimount for upgrade modules is provided. The addition of custom engine boosters will somewhat offset this early speed deficit.

A pair of shield pods are mounted on the Chassis to deflect some damage from every strike made against the mecha. Twin slots are mounted for the addition of upgrade modules. To give the Orester greater durability, the designers included four slots for the installation of heavy shielding.

The Orester was introduced near the end of the major Cogwerk/Illyrian conflict and Cogwerk’s early negotiations with the Illyrian Senate were fraught with disagreements and small offensives. Many Cogwerk clan leaders thought it necessary to establish strict autonomy to safeguard their interests. It was a grim time for the Illyrian generals who fought in those battles--they suffered great losses due to the sheer destructive power of the Orester's missile bombardments. For this reason, owning an Orester in Cogwerk society seen as a symbol of Cogwerk pride as well as a reminder that Illyrians must respect Cogwerk’s sovereign status.

When the engineers of the Symposium started designing an update package for the Orester in the early 3300s, they knew it would be a very large project. It was well known that the Orester had an important place in their history but the time had come to modernize this mecha’s systems. Their aim was to improve every feature of the mecha possible to make their flagship mecha a force to be reckoned with.

Starting with the AI, the update team added processors to enhance in-flight missile course correction, further increasing the damage per salvo that strikes the target. This was intended to improve missile performance but the specifications were so precise, there was some crossover that benefitted projectile systems as well. New programming that can amplify the Fork and Splash effects carried by many missiles was also added to compound the Orester’s offensive capabilities.

Symposium engineers decided to address the known deficiencies of the Gaslight by completely overhauling its matrices to create a significantly more efficient system. New power management programming creates energy reserves dedicated to the motive system, greatly increasing the Orester’s ability to respond quickly in battle. Greater power production offsets the inconvenient drop in speed caused by the addition of more systems in the base model. A pair of small overload capacitors were hardwired into the missile feed mechanisms to increase the rate of fire. Several shield pods were also added to boost defensive capabilities, nearly tripling the protection provided.

These improvements have resulted in the addition of the Orester to many front line formations both inside and outside of Cogwerk space.