The Myrmidion is a mecha borne from the despair of the galaxy. An endless series of problems plagued the outer, less developed worlds, and many planetary militias began to feel increasingly abandoned by their respective governments. These governments themselves, larger than life and boasting enormous power, themselves seemed endlessly beset by the forces of evil and destruction; forces that seemed to be growing in strength by leaps and bounds. The smaller planets began to desperately search for a way to protect themselves from the fantastic forces plaguing their lives.

To keep their loves ones safe and to keep their livlihoods intact they knew they needed better mecha to meet the increasing challenges. On the outer worlds, however, money and funds can be scarce, even to planetary governments. New, top of the line elite mecha were beyond the capability of most smaller planetary governments, leaving them increasingly on the wrong side of an arms race against the forces that assailed them.

In desperation, various small planets began sending out delegations through space. The goal was simple, but large, to find help; to find genuine aid in their struggles against forces that seemed so all encompassing. Eventually, whether by the grace of a higher power, the machinations of fate, or just dumb luck, that help would be found. It was found on the home planet of one particular company: Star Factories.

Star didn't have a ready supply of what they were looking for, but they provided more than anyone else would at the time: they offered to make something new to fulfill the delegation's needs. They offered to use their knowledge to create a new mecha, powerful but also affordable enough that smaller delegations might be able to protect themselves from more advanced and richer enemies. To this end the Myrmidion was born.

The Myrmidion is unique in that it's crystalline super structure is extremely compatible with accuracy upgrades, giving the mecha a total of 35 precision when fully upgraded; a rarity in the crystal mecha world. The mecha itself shares an affinity with laser damage, and shots can be empowered with either extra damage, or potentially with forking electrical discharges to hit multiple opponents at once with a single blast. The mecha is also quite customizable, with 7 slots for both the Cockpit and Engine allowing for the pilot to tailor the final specs to their own needs and desires.

Star Factories also understood that the outer planets do not have the same inexhaustible pilot supply the larger governments have and every loss would hinder their buyers greatly. To this end the mecha was given shielding against all damage types and sizable shielding to prevent it from being caught up in the blast radius of attacks aimed at other mecha. 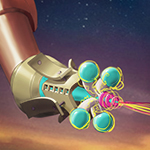 A focused laser beam with an advanced aiming system

A focused laser beam with an advanced aiming system 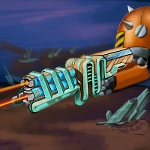