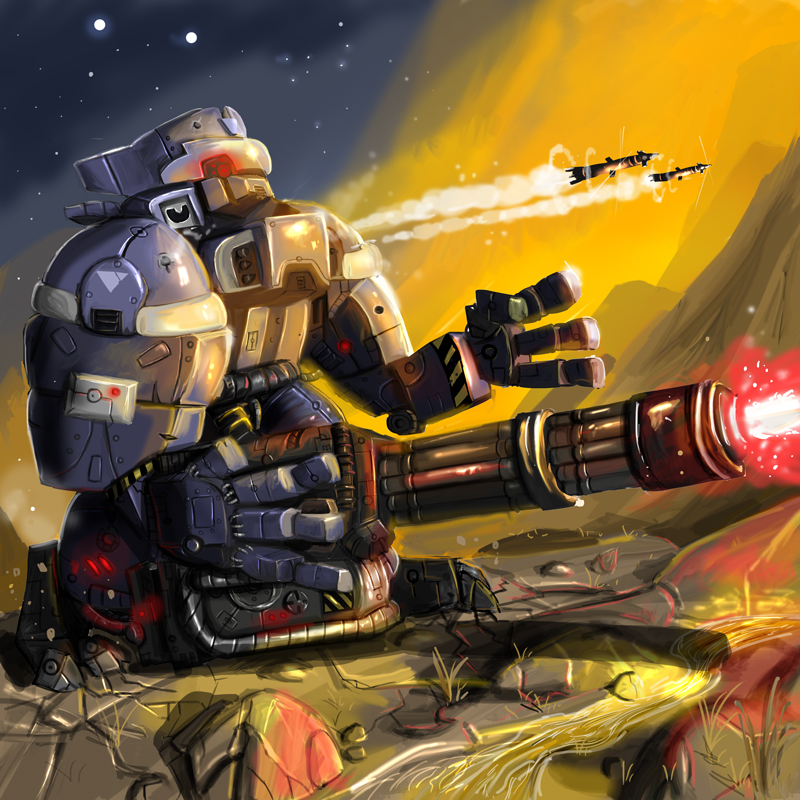 When the House of Strategoi commissioned the Oggun, they sought a paragon of practicality. They wanted a utility mech that could do whatever was necessary. The medium tonnage Oggun meets that requirement and it actually projects more power than its stocky frame should be able to handle, which is a pleasant surprise.

In keeping with the practical design, the Oggun is fitted with a basic Star Factories WL34(Military) A.I. This model is used in a variety of Hegemony mecha and conventional military vehicles. It comes standard with dual ports for mission specific software or for pilot customization. The Military version of the WL34 also adds a considerable amount of tracking programs and IFF coding, enabling it to engage any incoming mecha in the area who are not broadcasting on the proper frequencies.

The power plant for the Oggun was designed by Dr. James Ashby. The "Ashby" design was originally dismissed by the senior Star Factories engineers, saying that it seemed more fitting for powering construction equipment. It was later reconsidered and approved for use by a senior House of Strategoi member after the entire Oggun project threatened to run over budget and over time. The design is simple as compared to other mecha power plants, yet the Ashby is surprisingly powerful for its size. As the niode matrices are upgraded, the power generated from the Ashby produces enough excess energy to overload more than half of the shots fired. The simple design has made it the power plant of choice for Strategoi forces. The Ashby houses a single port for custom equipment and its ease of maintenance makes it a favorite of techs everywhere.

The chassis is the most complex and technically sophisticated component of the Oggun because of its impressive durability and shear-resistance. The design is constructed from a (still) classified molynubonium and aluminum alloy that is used as a base for a crystalline composite material. Triple redundant ports are installed on the chassis for the addition of custom or mission essential equipment, allowing for significant customization of this utility mecha.

The heavy armor plates of the Oggun are constructed of the same material as the chassis, giving it a higher level of protection than other similar medium tonnage mecha. Customization slots also enable the installation of three heavy shielding modules. Additionally, the Oggun carries several built-in weapons accelerators and a "lock-down" mechanism to anchor itself while firing. This allows it to fire with enough power to pierce through multiple lines of enemy mechs with one shot.

Not to be outdone by their rivals in the House of Romulus, engineers from the House of Stategoi also capitalized on the unprecedented access to new technologies that began during the Cogwerk Renaissance to improve on the Oggun's design. They accentuated the already rugged and sturdy design of the Oggun by adding a multitude of shielding to the mecha's frame. Several general shield pods were added to the chassis to deflect any incoming fire regardless of source. Wide array deflectors mounted in several pairs also protect from area Splash attacks and secondary targeting systems using Fork attacks.

Additions were also made to the WL34 in this upgrade package, granting it increased accuracy and Trample abilities while targeting approaching enemies. While there was not enough space available for additional engine upgrades in the bulky Crystal based chassis, several boosts to speed can be obtained with sufficient upgrades to the power plant. A minor amount of power is also freed and directed into the weapons system to increase the Oggun's already deadly frequency of overloaded salvos.

House of Strategoi historians like to remind everyone that when the Oggun was first commissioned, there were tensions between the leading military contractors within the Hegemony, since the proposed Strategoi Oggun model was perceived as competing with the established Romulus Fides model. Star Factories was convinced that they would both prove to be useful, so they went ahead with their new plans for the Oggun. Fides and Oggun have different but equally important strengths, so the anticipated competition between them turned out to be less than imagined. The House of Strategoi and the House of Romulus take their rivalry more seriously, however, and young pilots from each house are often seen engaging each other in battle to prove their strength and bravery. This competition is also seen in the ongoing political power struggles between these two great houses.

Oggun has become a central mainstay in the House of Strategoi as well as various other clan armies around the galaxy. It is a solid mecha worthy of any formation, and it will add significantly to your arsenal.