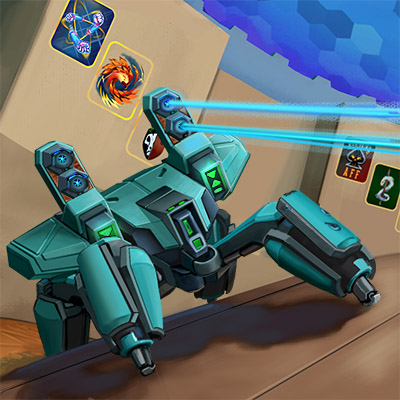 Time and again, individuals have committed themselves to understanding, memorizing, and executing the skills and knowledge necessary to be elite mecha pilots. The Vizi was designed by The Craftsmen for the most accomplished groups of pilots displaying the utmost mettle and teamwork on the battlefield with those ideals in mind.

The tournament agent that revealed the details of the Vizi to the organizers was sure to go over each of the mecha's astoundingly crafted details. Several of the most respected authorities on mecha craftsmanship all agreed that everything about it was just better than all of The Craftsmen designs that came before it. When The Craftsmen announced that it should be awarded to only the most experienced and accomplished clans, every young pilot gained one more reason to strive for greatness.

The Craftsmen said that they were determined to improve on the Zadok's design and they have clearly succeeded. Starting with the A.I., everything about the Vizi is the epitome of the balance of function and form. The Vizi uses a revolutionary circuit design that defies most common and efficient practices, with seamless implementations that only top-of-the-line mechs have struggled to use. The A.I.'s superb target prediction routines enable the Vizi to get the best possible performance from its weapon systems. Battlefield threat assessment and multi-target tracking allows the Vizi's A.I. to identify and engage a primary target and a secondary target simultaneously, without specific assistance from the pilot.

The electronic suite of the Vizi also directs a constant stream of false data, white noise, and system-disrupting electromagnetic interference to slow the function and reaction time of enemy mecha. This combination of features makes the Vizi the most formidable mecha of it's size. Since its release, rumors have circulated the galaxy about how the Vizi has been seen taking down much larger mecha with better weapon systems. This is not surprising considering the elegance of this design.

The Vizi is loaded with two mounted turrets that feature advanced auto-loaders capable of cycling through its weaponry quickly and without malfunction. A Craftsmen next-gen computer and power coupling regulator supplement the powerful and highly effective Tetrapod Movement System, offering increased stability and shielding.

Powering the Vizi is the same Hercules class power plant that contributes to the superiority of the Zadok's design. The Hercules provides ample power to increase weapons function above factory settings regardless of type. Coupled with the telemetry from the A.I., laser weapons quickly gain a boost and overloaded tri-powered salvos are not uncommon for the Vizi's entire arsenal. The Hercules has triple redundant customization ports that allow pilots to put their own signature on this work of art.

The Craftsmen technology used to construct the chassis of the Vizi is as exceptional as every other component. Performance analysis indicates the chassis is more than adequate for use in a machine almost twice the size of the Vizi. This chassis is also very compact and can support up to three custom modules, allowing the pilot to configure the Vizi for any set of mission requirements. Shield pods mounted across the chassis provide considerable protection and three more ports allow for addition shielding.

Beginning around the year 3300, a technological Renaissance began throughout the galaxy. The Craftsmen were at the forefront of new research efforts and at the center of a new era of cooperation and sharing of information, research, and technology among the Major Powers and Great Clans of the Galaxy.

The Vizi comes of the assembly line as an offensive minded, efficient killer. The updated programming enhances and expands upon that concept. Every weapon system is further refined and tuned to generate even more deadly power than previously possible. The A.I.'s multi-tracking system becomes more active at engaging dual targets with greater frequency and will on occasion engage up to five targets simultaneously as well as splash additional weapons fire on any mechs near the primary target.

As with the Zadok, improvements to the Hercules power plant enable overloaded salvos more and more often. Although the Vizi gains a majority of offensive upgrades, it really begins to shine defensively as well. The shield pods gain a small boost to power but the addition of shields protecting the Vizi from Fork and Wide Fork attacks guard its flanks from unexpected attacks. The net result is a mecha of high tactical value, capable of adapting to the needs of almost any situation.

The Vizi is more than just a machine -- its a statement, a commitment to higher thinking, progress, and beauty. Only a true mecha pilot will be able to know its touch of grace.