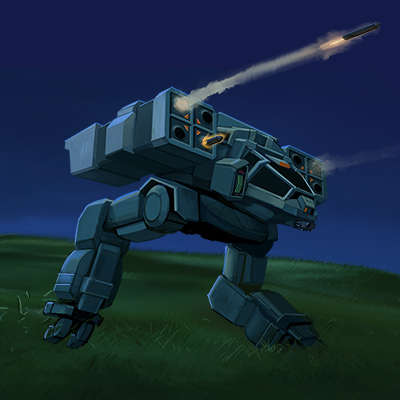 The Luison was designed as an all-purpose military field mecha. More so than many of the designs that have made this claim, the Luison performs in a variety of roles with ease and reliability.

Primarily deployed as a general patrol mecha, its utilitarian approach to weaponry enables it to bolster a specialized attack formation by filling in weapons coverage of any type. Luison holds a significant percentage of the roles in Shogunate forces because of it's low cost and relative ease of maintenance.

The Luison is the exclusive craft piloted by the “Yellow Birds”, the Emperor's personal guard. They are a full squadron of sixteen Luisons that accompany the Emperor at all times. While the Yellow Bird pilots perform a ceremonial role, they are also among the most highly trained and deadly warriors in the galaxy. Because of the honored status of the Luison in protecting the Emperor, they have become the choice for Honor Guards stationed at Monuments and Shrines across the entire Shogunate region.

The philosophy behind the Luison is simple -- ease of use and ease of maintenance. The key to the design was the development of the Universal Clamp Actuator Socket (UCAS), a crystal based joint that will support any piece of machinery as a replacement item. The UCAS enables the Luison to be severely damaged, then rebuilt in the field to operational standards in less than a day. This is ideal for a machine that may need to spend extended periods of time out of contact with a supply chain. This utilitarian attribute has earned Luison a reputation for near indestructibility, which has inspired many pilots over the years.

AlphaCorp engineers designed all the main components of Luison with the goal of keeping it as low maintenance and user friendly as possible, starting with the cockpit. The Astradyne A.I.has a simple interface that's easily linked with the UCAS system. It's fitted with twin ports for mission specific equipment, plus an additional UCAS system slot for upgrades. This helps pilots fine-tune the controls to suit their needs.

Powering the Lusion is a basic Hotomazu Fusion Core. Right off the assembly line, Luison can draw enough power to occasionally overload a weapon for increased damage. With sufficient upgrades to the UCAS and niode matrices, this ability makes a massive leap forward and gives the pilot excess power for overloads on more than half of the shots fired.

UCAS joints can secure any weapon system to the body with equal success, allowing for rapid reconfiguration against any threat. Additionally, they offer a universal performance increase, decreasing the need for specialized weaponry. Twin ports are mounted on the UCAS for custom equipment to be added to both the power plant and the chassis. Binary switch interfaces on the UCAS allow twin shield mounts on each side of the chassis, accommodating up to four heavy shielding modules.

Simplified controls and the versatile pilot interface makes the Luison the heaviest mecha that can be piloted without advanced training; this fact has been appreciated by both militia forces and rookie pilots. The Luison is consistently seen in widespread use and is valuable as a durable scout mecha or a point mecha in middle-weight response forces.

The Luison's specially-designed modular form also enables it to perform non-combat tasks very effectively. A Luison can easily be re-tasked for civilian crowd control in a short amount of time. Nets and tear gas canisters can be fitted and launched with a simple ammo reload. Luison's systems also accommodate low-velocity rubber bullets or sandbags.

The diversity built into Luison's practical applications with weaponry were translated into a defensive package with the upgrades it received during the technological Renaissance of the early 3300s. The UCAS enabled engineers to install shielding specifically tuned to all known weapon types. Several minor refinements were made to the fusion core adding to available overload power as well.

The most significant increase to the Luison's offensive punch in this upgrade comes in the form of anti-mecha virus programming added to the Astradyne A.I. The ability to force an opponent to stop and then restart is a welcome addition to the Luison's arsenal.

A word to the wise -- if you see the Yellow Birds, keep a safe distance.