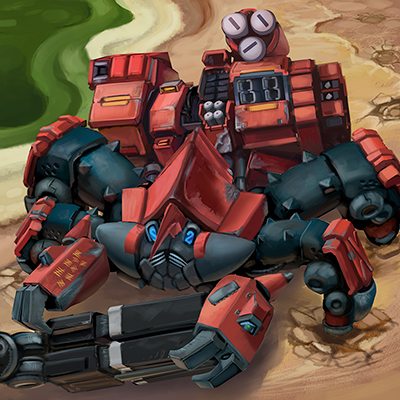 The Humbaba is the product of the first collaboration between GDI and NovaStar, a engineering and consulting consortium established by General Nova. Released just as the clans defeated Drochah in the Faction War of 3314, this mecha was designed to take advantage of the significant advances in Missile technology made in the early 3300s.

GDI has been a weapons and equipment manufacturer for light mecha for over two hundred years. After the Illyrian Hegemony’s Radix Tribe introduced the first mecha in 3087, GDI was the first manufacturer to bring niode-enhanced weapons and equipment to the military marketplace. Their only foray into mecha production has been the ubiquitous Warhorse. While this mecha has a presence in every major, minor, and even bandit army in the Galaxy, it has always been a secondary project for GDI. The company is now shifting its focus to improve their mecha.

In 3310, an ambitious new CEO, Ian Deeks took the reigns at GDI. After retiring from mercenary piloting he put his expertise into developing components for mecha. Not satisfied with the status quo, he and his team set out to rival the major manufacturers of high-end mecha systems and weaponry with a special emphasis on Niode-enhanced gear. Once this expansion was underway, they set their sights on the high-end mecha market. GDI turned to NovaStar for help with this project after NovaStar’s success with their first design, the highly coveted Fext.

The League of Ages takeover on Jungle Moon Rizpah and Ghenghis Khan’s attack in 3313 provided ample evidence that Drochah and The League of Ages were becoming more dangerous. Genghis Khan’s use of the Chroniode and the subsequent release of Banshee mecha onto Rizpah let slip evidence that Drochah already controlled at least one other timeline. Several dozen of the Banshee mecha were accidentally displaced into our timestream, alerting the major powers as well as the clans that Drochah had more power than they realized.

Gen. Nova recognized this as the greatest threat ever faced by humankind and he set out to design a fearsome mecha that could help restore order. As a constant reminder of the danger they were facing, he and the GDI team named this mecha Humbaba after the earliest recorded villain in human lore.

The Humbaba is built on the principle that “the best defense is a good offense”. The A.I. in the Humbaba uses a base model Charon-17, the same unit used in the Fext, but with a unique software package designed to enhance the Missile focus of the mech. Fully upgraded, the course correction algorithms will easily double the number of missiles striking a target compared to an unaided salvo. The secondary effects of Splash and Fork that are built into many Missile systems also receive an additional boost from the Charon-17.

Target movement prediction programming in the Charon-17 allows the pilot to strike their intended target up to 30% more often than standard A.I.s allow. Several scanning systems are included in the programming to search for weakened armor plates or other vulnerabilities that can be exploited for a one shot “Crit-Kill”. These scanning systems can also transmit viruses that will slow the reaction time of an opponent while their systems try to compensate for the false data fed to their mecha.

One feature of the Charon-17 A.I. that was carried over from the Fext to the Humbaba is the overload power management programming. When excess power is generated, the A.I. directs it into capacitors slaved to the weapons systems. This feature enables the Humbaba to create 1.5X, 2X, and 3X overloaded salvos. If all the capacitors are discharged simultaneously a devastating 9X overload is created. When paired with a high damage missile, this discharge is virtually impossible to survive. The Charon-17 features seven ports for custom equipment to be added to the offensive suite.

Powering the Humbaba is the massive Goliath Fusion Core. This powerplant is the largest installed in any mech design to date. While the sheer size of a Big Fighting Machine class mecha precludes swift movement, upgrades to the Goliath will bring the maximum speed for Humbaba up to plus two above combat optimal.

Sturdy and redundant containment fields on the Goliath Core give the Humbaba an extra degree of resistance to Projectile attacks. This increase in speed does come with a cost and the Goliath’s coolant system can temporarily go offline, creating a minor vulnerability to Fire attacks. Fortunately, this is easily countered with the addition of fire-resistant shielding. The Goliath can additionally control up to four auto-repair nanobot swarms when fully upgraded. This powerplant features eight slots for adding custom equipment to meet mission requirements.

The quad design of the Chassis is an ideal stable platform for the deployment of Missile weapons. Additionally, the low profile aids to counter secondary attacks against it. The Humbaba can evade much of the damage inflicted by traditional Forking attacks, not by physically moving out of the path of incoming fire but by projecting a dummy signal that can fool enemy mecha targeting locks.

Several heavy Shield pods are mounted on the chassis to provide general protection from all types of attacks. The Humbaba is also fitted with magnetic resonators that feed false proximity data to incoming projectile salvos and cause their warheads to detonate before impact. This can reduce the effectiveness of those attacks by almost 40% with sufficient upgrades. The large chassis carries seven slots for additional equipment and five slots for heavy shield units, allowing for a full pentagram of overlapping shields.

The development of the Humbaba has brought GDI and NovaStar into the spotlight as up and coming authorities on BFM design. NovaStar retains several legendary pilots as consultants and test pilots, a decision that has helped launch them to the forefront of the field.

Chief among these pilots is Jaime Beltran. Jaime’s years of combat experience with Cyberstorm, PheonixStorm, and later Zeon has given him a wealth of knowledge of cockpit assemblies and control layouts, and he has put that knowledge to good use as part of the design team for the Fext and the Humbaba. His long years in a mech also made him a natural choice to head up NovaStar’s test pilot program. Jaime can regularly be seen recruiting new test pilots at the King of the Mountain competitions.

NovaStar has declined to comment on their next project but the major militaries of the galaxy are all very interested in obtaining their next design. 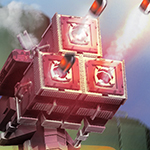 These missiles clear the battlefield like an erupting volcano.

These missiles clear the battlefield like an erupting volcano.