The Reaper was designed and released to the galaxy in response to a small but growing isolationist movement in the Society of Cogwerk Planets (SoCP) in the year 3315. Recent attacks on mecha facilities by the Valkyries and the marauding armies under the command of Charles Newburn, the Feeder of Ravens, had prompted many citizens to voice their concerns about the stability of SoCP and the ability of the military to maintain security for them.

It was at this critical juncture that NovaStar, the engineering and consulting consortium that helped produce the Fext and Humbaba mecha designs approached Military High Command of Cogwerk to collaborate on a new design. Talbus Arms had long been tasked with internal military matters concerning SoCP. With all the recent threats to the galaxy, Talbus Arms was primed to take a more active role in ensuring the defense of the realm and they advocated for the project to move forward.

Under the leadership of NovaStar’s Test Pilot Program Director and Project Manager, Jaime Beltran, the NovaStar design team developed the Reaper schematics quickly. Jaime’s extensive experience with the Fext class mecha made him an ideal candidate for this role. His team worked with Talbus to have the new design ready for approval in just a few weeks.

When Talbus Arms released the blueprints for the Reaper to the Society of Cogwerk Planets central planning commission, they were met with both skepticism and approval. No manufacturers in the SoCP had designed a 100 mecha yet and Talbus Arms’ largest production mecha to date was the Buchis. Cogwerk needed to start competing with the other manufacturers making BFMs if they wanted to keep a realistic business edge. NovaStar’s considerable influence with the mercenary clans provided a large ready-made market for the Reaper, which helped Talbus get the support they needed to proceed to the manufacturing stage.

The Reaper’s offensive electronics suit is built around the massive Gustav class A.I. The primary focus this A.I. is projectile firepower. Fully upgraded, the Reaper can expect to see an impressive boost to damage from cannon fire. To ensure that those cannons hit their mark, a large portion of the system’s processing power is dedicated to the targeting systems. This dedicated power generates a hit ratio that’s 21% greater than an unaugmented unit.

Secondary targeting systems are used to enhance the Trample effect already in place on many Projectile systems, allowing the pilot to weaken approaching enemy forces before they reach the line of battle. Also included in the programming is a sophisticated target analysis system, dubbed by the test pilots the “Achilles Switch”. This program searches for exposed systems or damaged armor plating and directs a one shot Crit-Kill into the opposing mecha.

A pair of anti-mech viruses are built into the Gustav class A.I. to degrade the effectiveness of any foe. The “Earwig” sends thousands of random commands per second to the enemy mecha, which slows its reaction time as it sorts out the false positive commands. The “Heartworm” virus uses a brute force override to attempt a shutdown of an opponent's mecha. This type of forced restart can take an enemy out of the battle long enough to disable them before they can return fire. Fully upgraded, the Gustav supports seven slots for custom equipment.

A supercharged fusion accelerator powers the Reaper. The power output of this accelerator can easily meet the demands of the motive systems while generating enough excess to charge the overload capacitors built into the weapons systems. These capacitors enable the Reaper to generate massive triple force salvos that can easily devastate most attackers.

As with all mecha of this size, the Reaper is a bit ponderous when it rolls off the assembly line, but fully upgraded the power plant will bring its speed up near to combat optimal. The addition of seven custom equipment modules for the engine combined with the rapid rate of fire that make projectile systems so popular alleviate any concerns about raw speed.

In addition to a generous amount of equipment, the accelerator has a pair integral Auto-Repair nanobot swarms. A small drawback to this system is unique signature created by the fusion containment field. The wavelength is easily isolated, making this mecha somewhat susceptible to missile fire.

The primary defensive platform for the Reaper is comprised of six mounts for heavy shielding modules housed in the framework of the mecha. The installation of a C.I.D.S. (Close In Defense System) provides protection from area attacks. This system reduces the effectiveness of Trample or Splash attacks in battle, giving the Reaper more resilience in battle.

The chassis of the Reaper is also studded with shield emitters. Mounted in pairs, the first emitter deflects any incoming weapons fire while the second is tuned to absorb damage from Flame weapons.

The Reaper design has been wildly popular among the mercenary clans since the initial announcement. Several of its design features were clearly taken from the very successful Fext and the venerable workhorse of many armies, the Oggun. The Reaper is stepping off the assembly line with a good chance of becoming an instant classic and another high profile success for NovaStar. Several units were dispatched to assist in the defeat of the Feeder of Ravens and quickly are becoming a common sight in the forces of the elite clans of the galaxy.

Darkness there, and nothing more.

Darkness there, and nothing more. 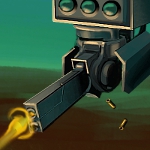