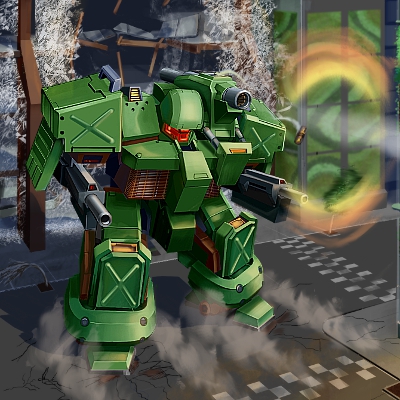 Produced by Asgard Heavy, LTD., the Corsair was commissioned at the outbreak of the Second Grand Campaign against the League of Ages. This solid mecha has quickly gained popularity among mercenary pilots. Even for a mecha of its size, the Corsair is ponderously slow off the assembly line but it gains a multitude of speed increases as it’s upgraded. The Projectile weaponry focus helps it quickly overcomes this disadvantage and secondary bonuses to Ice weaponry give it versatility and a variable offensive punch.

The Halloran energy core was selected for the Corsair specifically for its upgradability. This power plant provides enough power to overload the weapons for double and triple power salvos available for use as the Corsair clears the factory gantries. Early upgrades to the Halloran are directed to the motive systems and the double-charge capacitors.

Speed increases are still frequent at higher levels of development and power sent to the weapons systems is directed to the triple-charge overload capacitors. At higher levels, additions to the triple-powered overloads increase steadily at close intervals, resulting in seemingly constant additions to the Corsair’s capabilities. An Auto-repairing nanobot swarm provides ongoing repair during battle. Up to five custom hardware modules can be mounted on the Halloran for mission specific needs.

The offensive electronics package is managed by the Vahrger Class Battle Computer, the first A.I. constructed by Asgard Heavy LTD. It was constructed with the intention of a variable design that could be easily modified for use in multiple types and sizes of mecha. Featuring a considerable amount of ballistic programming, the model excels at maximizing the effectiveness of projectile systems. Fully upgraded, pilots can expect the Corsair to deliver armor punishing blasts that are 50% more powerful than factory specifications for all cannons.

The ballistic tracking programs of the Vahrger enhances the Trample effect built in to many types of projectile weapon systems. Ice weapons gain small boost to power output as well. Following the success of the Warg, Asgard designers and engineers decided to simply make a much larger version of the 17-g series chassis. The 17-g-91 created for the Corsair carries several defensive measures to increase its operational span, particularly against area attacks. Heavy Trample shielding protects the Corsair as it closes in on its intended prey. A pair of small shield pods provide protection against incoming fire along and seven heavy shield mounts are available for custom equipment. The 17-g series is easily adapted for many different roles and carries five mounts to facilitate this multi-role function.

On the defensive side, the Vahrger generates white noise and uses radar jamming to interfere with targeting systems of enemy mecha, reducing the success of incoming attacks. These also reduce the effectiveness of the secondary targeting systems used in Fork and Wide Fork attacks. This Battle Computer can simultaneously run up to six additional programs as added by the pilot.

At the time of the Corsair's release, Xerxes and his League were one of the greatest threats to the known galaxy. While Xerxes and his armies of time-displaced soldiers ran roughshod over the small garrisons of the fringe worlds, the Mercenary Clans banded together to form massive armies to stop the League of Ages from completing their plans to enslave mankind. 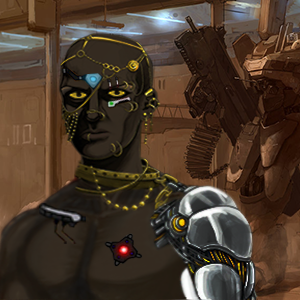 As expected, the largest of the Mercenary Clan Families banded together to form factions to combat this menace. The sheer size of the armies Xerxes had amassed required the clans to array their own forces in equal measure if they were to have any hope of defeating him. The Mercenary clans with the most highly developed firepower lead the process of planning the resistance against Xerxes and they called upon the leaders from multiple highly experienced clan families to form the initial assault.

PheonixStorm and Misfit Toys from the MMI family and the command team from Highland Force joined with the legendary Zeon clan to lead the offensive against the League of Ages, calling themselves The Storm. The Bouncing Blues gathered their usual band of wild-eyed pilots as well as a second band of bloodthirsty bunnies dedicated to destruction and the wyrd alongside the forces of their Smurf Clans allies. With The Storm at the vanguard of the assault force, the Myths and Legends faction and the Highland Force deployed on the flanks to prevent the escape of any of Xerxes troops while the BBB deployed as the reserve force.

No less deadly than The Storm, the Fusion Clan recruited the commanding officers of the RND clan family to form Alpha Unit. With the elite pilots of Fusion and the tech-savvy members of the RND, Alpha Unit deployed a dream team of brawn and brains. This was a strategic move to capitalize on RND’s ability to plan devastating counterattacks and Alpha Unit was joined by the AFF, Blackstar, and Overlords factions to provide the focal point of the defenses for the mercenary forces. AFF reinforced their Collectors unit to create a team of veteran pilots whose long history of shared service would aid them in the battles to come. Although deployed as a reaction force, the AFF’s long tradition of teamwork and training ultimately gave them the upper hand against Xerxes.

The size and ferocity of Xerxes assaults into the Shogunate caught several factions off guard. At the marshalling yards on Abergrist Delta his armies smashed into and cut off both the Highland Force and the Myths and Legends. Without reinforcements, both units were decimated. After a week of constant fighting, a relief column from the Bouncing Blue Berzerkers was able to break through and evacuate the survivors. The Storm had no such difficulties. They assaulted the League of Ages wherever they could find them. During three days of intense fighting The Storm cleared five worlds of Xerxes’ forces. Nicknamed the “ghost legions” by one pilot, the battalions of Xerxes’ forces who encountered The Storm simply vanished.

Xerxes foolishly committed his troops piecemeal in his engagements with Alpha Unit and the Death’s Collectors of the AFF. Just when Xerxes thought they were clear of a pincer trap, they would be crushed by the RND hammer on Fusion’s Anvil. The largest and most pivotal engagement of the war involved the Death’s Collectors. Holding a strategic gateway that links over a dozen worlds, the Collectors fought wave after wave of Xerxes’ forces. The experienced pilots had a significant advantage since they were capable of repairing their own mecha and these skills combined with their unyielding determination in the face of the enemy secured their victory. At the end of six days of the heaviest mecha engagement since the second Shogunate/Illyrian war, the AFF had destroyed a force totalling twenty six times their size and amassed a 52 to 1 kill ratio.

While the initial production runs of the Corsair were sold exclusively to the militaries of the Major Powers, they quickly found their way into the hands of the various Mercenary Clans by way of battlefield salvage. With the addition of the Corsair to their formations, the Mercenary Clans gained the edge needed to finally defeat Xerxes.