The Commissar first arrived in this galaxy in 3316 as part of the initial assault wave of the Unification Army. Serving as a middleweight scout mecha, it enabled the invading forces to secure a beachhead while they awaited the arrival of the main Unification forces.

The Unification Army functions as the military arm of a society called Unification that is based in an alternate timeline accessed by Drochah through use of the Chroniode. The first time that the mercenary clans caught a glimpse of the technology belonging to Unification was when the Banshee mecha appeared on the Jungle Moon Rizpah. The clans did not know this at the time, but that set a series of events in motion that would eventually lead to the clash between the mercenary clans and the Unification Army.

As with the Banshee, some enterprising engineers were able to reverse-engineer the Commissar and develop their own model for production. Cherry Blossom Mechworks in Sengakuji Reaches manufactured the first Commissars made in this galaxy.

The cockpit of the Commissar features the twin port Ravagami A.I. The A.I. focuses a large portion of its processing power on boosting the damage output of laser weapons. When fully upgraded, the pilot can expect well over 50% more damage than factory specifications from lasers. At higher degrees of upgrades, pilots will also see a generous boost to damage from flame weaponry.

A secondary feature of the Ravagami is the integrated offensive anti-mech programming. The system-crashing viruses projected by the A.I. slow the response time of opposing mecha and can even shut it down in the middle of combat, giving the Commissar pilot time for a coup de grâce or to escape, depending on the situation.

The inclusion of target analysis processors in the Ravagami additionally strengthens the A.I. programming. When a weakened or vulnerable area is detected on an enemy, it can send a one shot Crit-Kill into the vital systems and destroy the opposing mecha.

Powering the Commissar is a Khemlov Energy Core. This power plant is popular with technicians due to its durability and ease of maintenance. When upgraded, the Khemlov generates considerable power in excess of the motive needs of the mecha. This power is shunted into overload capacitors, enabling the Commissar to generate double powered salvos on over 40% of shots fired upon full development. Like the Ravagami, the Khemlov carries twin ports for additional equipment to enhance the mecha’s operational profile.

The sturdy chassis of the Commissar houses four hardpoints for the addition of custom equipment. Its rugged design allows the pilot to complete high gee maneuvers that are not possible in other mecha of this size. This gives the pilot the ability to dodge incoming attacks with ease. A modest amount of Trample shielding is included to protect the Commissar as it closes with the enemy. Additional protection from area attacks is provided in the form of hefty Splash shields. Rounding out the defensive suite is a slot for the addition of a heavy shielding module.

When Unification invaded the Illyrian Hegemony in 3316, one of the first campaigns launched by General Conover was a massive deception designed to make the initial forces seem like a much larger force than were actually present. The fast-moving Commissar was ideal for this role. It could keep pace with the Illyrian scout forces, while delivering the firepower of a mid-range raiding party.

The quick strikes against Illyrian scouts disrupted their ability to accurately locate the main Unification forces. The speedy mecha then returned to base for a refit and were sent out with a fresh pilot on a hit and run attack against forward supply points and communication relay stations before returning to rearm and again take on a new pilot. Using this tactic, General Conover was able to send his squadrons of Commissars on six or seven sorties a day. The beleaguered Hegemonic defenders were unable to mount an effective counter attack until reinforced by the Mercenary Clans.

While the Illyrian military was fully occupied with the defence of their worlds, the Sengakuji Reaches used their contracts with the Mercenary Clans to procure several Commissars and seized the opportunity to be the first to study the new mecha’s design. In a very public spectacle, the Prince of Flowers sent a majority of the Mercenary Clans that were under contract to “aid their neighbors against the alien invaders.” His true purpose was to procure as many of the invaders mecha as possible, to be shipped back and studied by Cherry Blossom Mechworks engineers.

The other mecha produced in the tiny nation include the semi-alien Forerunner designs of the Nakshi, Skriag, and Gigus. The Prince of Flowers and his advisors were convinced that Cherry Blossom Mechworks engineers’ in-depth knowledge of the Forerunner designs would expedite the process of reverse engineering the Commissar. As with the Banshee mecha, the Commissar was not as alien as first thought. By the time the Illyrian Hegemony and Mercenary Clans had triumphed over the Unification forces, Cherry Blossom Mechworks had begun the initial production run of the Commissar.

The Prince of Flowers decided to take on the production of the Commissar hoping that the sales of this new middleweight scout design would be the final step in economic recovery from the Sengakuji Reaches’ split from the Shogunate after their bitter civil war in 3307. The Sengakuji alliance with the Society of Cogwerk planets and co-production of the Buccaneer enabled the Prince to broker a deal for an exchange of Commissar mecha for Banshees. In a savvy maneuver, the Prince of Flowers presented the Illyrian garrison on Srixin the first units produced, in honor of their victory over the Unification Army.

The political and military advantages gained by the Prince of Flowers through the success of the Commissar has not gone unnoticed by the major powers. The Shogunate is naturally wary of them and while publicly, the Illyrians are making goodwill gestures and favorable trade treaties, their generals are concerned with the growing size of Sengakuji’s high-tech forces. Political ramifications aside, the Commissar mecha is quickly becoming a welcome addition to scout forces throughout the galaxy. 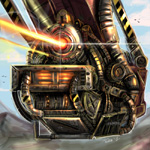 A strong weapon for new pilots. The Achilles Beam's aim has turned the tide in many battles, sometimes taking down much larger Mechs.

The rotating head on this laser increases its power while compromising the targeting mechanism.

The rotating head on this laser increases its power while compromising the targeting mechanism.