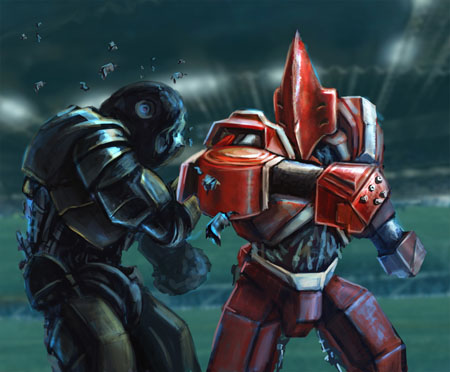 The Axe Bot is from a far-removed part of Earth's history, when mechs were used to display skill and cunning in combat. Records exist of Earthlings testing their prowess with mechs like this--while the designs may seem crude at first, the records show that physical engagements with mechs like these had become highly popularized and streamlined. The tournaments were presided over by an entity known as Syfy, who brought the mechs to the people and ensured that the fans were pleased.

The Axe Bot was a contestant in one such Syfy tournament, known as the "Robot Combat League". From what the records reveal, the societal impact of this tournament was widely regarded, and those that watched it took part in both habitual viewing and discussion of its contestants.

After acquiring some of these records, Star Factories initiated a new campaign for the reintroduction of the Robot Combat League into galactic society, with the Axe Bot as the symbol for its return to form.

To complement the reformation of the League, Axe Bot was fully upgraded--discarding its pneumatic workings in favor of a niode musculature and a complete humanoid biopics neural interface to account for sensitivity and reflex in all of the mech's extremities. Its trademark axes reinforced and given cutting edges, for both precision and strength. Its head-mounted cameras were replaced with lasers for ranged offensive capability.

Complementing the introduction of the Axe Bot was a full suite of other "opponent" mechs, each with their own specialized melee weaponry. As per Earth custom, Star Factories allowed certain individuals to qualify for the piloting of the mechs in combat through a series of tryouts and eliminations.

The results were rather astounding. The full neural mapping of the Axe Bot and its counterparts were most efficient in the hands of Cogwerk and Shogunate martial artists and those with practice in traditional forms of combat. Traditional mech pilots were often no match, even when placed at an advantage with ranged weaponry, due to an over-dependence on targeting systems. The Axe Bot could close the gap and dismantle opponents within a few blows. And if all else failed, the Axe Bot could finish the job with its trademark head bash, often capable of cleaving critical components in two. 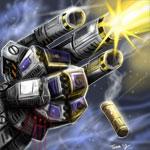 Expanding the use of Fury Tech, this special batch edition was made in honor of Bruce Lee, the Old Earth hero. 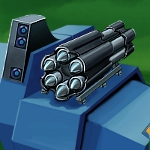 A spread of enhanced missiles hone in on enemies. The subfield targeting array places shots for ideal collateral damage.

Begin your arsenal with a standard issue missile launcher with some bite. The efficient, five-bay shoulder unit is favored by commanders with lighter Mecha.