The Clarke Federation’s military is best known for their elite bandit hunters, the Federation Rangers. After the initial Unification invasion of the Illyrian Hegemony in 3316, the Rangers requested a new mecha to aid them in facing a very real menace.

In 3317, Unification returned to this galaxy by traveling through portals, although these portals were smaller than the ones from the previous year. The first small portals opened in the Clarke Federation and the Unification Army quickly demolished large sections of the warehouse districts on three Clarke worlds before beginning their attack on a wide open front across the galaxy.

Clarke's Federation Rangers are arguably the most skilled unit fielded by any government. They regularly trounce units of the Major Powers in wargames that are similar to the Clan Wars contests the Mercenary Clans hold. Data gathered from the Rangers’ clashes with Unification lead the Balrog engineers to the conclusion that it needed more power and versatility, so they added a secondary weapon system built for Fire to the mecha.

The Rowe engineers also developed an impressive Overload Capacitor Control system that focuses on 2X overloaded shots for the Balrog. Other offensive features were passed over in favor of increasing the 2X capacitors for maximum firepower. Extra defensive features were added to the mecha in the wake of Unification’s attacks on the Federation due to the lessons learned in battle.

The AI constructed for the Balrog is very similar to the model used in the Magnus. It features damage enhancing algorithms for twin weapon types. For the Balrog, Laser and Fire weapons gain a significant increase to their effectiveness when tied into the targeting system.

Several anti-mech viruses designed for transmission from the AI enable the Balrog to slow the reaction time of enemy mecha. The remainder of the processing power of the AI is dedicated to Overload Capacitor Control. Fully upgraded, the Balrog will unleash a double-powered blast on over half of the shots fired. Six custom slots are provided for the pilot to add mission essential equipment.

The Wyvern powerplant selected for this design is ideally suited to the energy requirements of Laser and Fire Weapons. This efficiency allows it to charge the 2X overload capacitors quickly, delivering more offensive capability to the pilot. The Wyvern also has a very favorable power to weight ratio, making a fully upgraded Balrog the fastest 100 ton Crystal design yet. This powerplant carries one internal nanobot swarm for self-repair during combat as well as four slots for additional engine modules.

The chassis of the Balrog features one of the the most wide-ranging area attack defense packages ever designed. Shield emitters provide basic protection from incoming fire. Additional large modules protect the Balrog from secondary damage. Both Splash and Trample are countered by specific shields, while electronic jamming units prevent Fork and Wide Fork attacks from achieving a full lock on the mecha. The complexity of this system makes it somewhat susceptible to damage from Projectile weapons. Seven slots for heavy shield modules are included in the design.

A near frictionless magnetic fluid encases the joints of the Balrog, giving this mecha greater mobility than expected for a machine its size. A skilled Balrog pilot can often Dodge incoming attacks from their foes. A slight drawback in the design is a minor vulnerability to Ice weapons. The Chassis carries six ports for specialized mission equipment.

Fortunately for the Clarke Federation, their worlds power suffered relatively few attacks during the latter part of the 3317 Unification invasion. Damages from the early attacks were quickly repaired and Rowe Incorporated has enjoyed early success with the Balrog design. The smaller and more numerous Squads from the Mercenary Clans aided in the defense of the Federation worlds, providing the needed reinforcements. The new and readily available Big Fighting Machine for the Federation military played a very prominent role in their success in the battles against Unification forces.

Located deep outside what are considered the fringe worlds by the major powers, the Clarke Federation has carved their own civilization from the wilds of uncharted space. Early in their formation, they were little more than a collection of struggling colonies. When they turned to the major powers in the galaxy for protection against the pirates and bandits that occupy the fringe, their pleas for aid were ignored.

Clarke has a small but economically stable government that was established to ward off pirate raids but has grown into a minor power. The Federation Rangers now make Clarke’s territories an unwelcome place for pirates and bandits.

In 3317, Clarke also began actively recruiting from the Mercenary Clans, a departure from their standard reclusive tendencies. With the addition of the Balrog to their arsenal and some generous contract offers out to the clans, some are speculating that the Federation is preparing to recapture and recolonize one or more of their lost settlements.

Relwana and several other worlds hosted Federation colonies were abandoned in the early years of Clarke’s formation because they were overrun by bandit forces. Relwana is known to house at least one of the bases used by the Blackwing Bandits to stage raids into Federation territories.

If the Federation is able to secure enough pilots to launch an operation against the resident bandits, they would have a good chance of recapturing that settlement. While there has been no confirmation of an official contract, a large number of the Highland Force clans were spotted on Federation worlds immediately following Unification’s retreat back through the small portals. 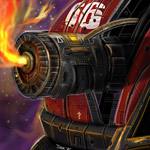