The Clarke Federation is located beyond the three major powers’ fringe worlds but that hasn’t stopped them from carving their own civilization from the wilds of uncharted space. In the late 3100’s, the Illyrian Hegemony and Meiji Shogunate were fully engaged in their second war and neither were willing to sell any war materiel to developing colonies like Clarke. At the time, Cogwerk produced nothing bigger than the Holmes, so the few mecha Clarke were able to purchase were no match for the armies of bandits they faced and they knew they needed to build their own.

Federation leaders knew they lacked the technical and industrial capacity to take on this task, so they recruited from the anti-imperialists in the Shogunate and the politically unconnected from the Hegemony to fill their ranks with scientists and engineers. They brokered a deal to get manufacturing equipment from Cogwerk and in return for that industrial equipment, they promised to supply Cogwerk with one third of the mecha they produced over the next decade. This was no small price to pay, but it was worth it to the fledgling colonies. Their first mecha was the Namtar.

The Namtar’s A.I has a singular focus -- quick and efficient destruction of enemy units. The Federation Gamma continuously scans the armor plates and shield cycles of an opponent to reveal any weakness that may be exploited by a “Crit-Kill ” shot. These shots can bring down an otherwise undamaged mecha. Up to three additional modules can be added by pilots to customize their mech.

The Tokamat plasma compressor was designed to meet the Namtar’s need for high power output. When it was first produced, it was one of the few mecha available with enough power to overload its weapon systems when it steps off the assembly line. With minor additions to the Niode matrices, the frequency and power of overloads can be increased to generate both double and triple strength salvos regularly. A general increase in power to all types of weapon systems, pushing their destructive output above design limits on the weapons also comes with upgrades to the matrices. Dual ports are installed on the Tokomat for additional equipment.

All the offensive capabilities of the Namtar do come at a cost. The engineers needed a design that used widely available parts that aren't always perfectly compatible with one another. The recoil management system pays the price for this, where occasionally a misfire will happen. The shock from the release of such massive firepower cannot always be absorbed by the mech's sturdy frame and periodically, this causes damage to internal systems.

Originally the design team wanted to reconfigure the mecha to a Niode based design, but the struggling Federation military knew they didn’t have the resources to produce such a costly design. Project leaders decided that the risk of some Kickback was outweighed by the offensive potential of the mecha and they needed to use it to defend their colonies. Federation Command deemed it to have an “Acceptable rate of failure” and pushed the mech into production.

Namtars have become the Illyrian Hegemony’s go-to mecha for use in colonial suppression due to their intimidating stature. The Namtar was rolled out to all the fringe worlds after their successful role in the squelching of the Marsera uprising. Due to the bulkiness of the chassis and rushed design requirements, only two ports for upgrades were able to be fitted on the Namtar. Engineers installed the widely used triplex shield mount for heavy modules to provide the Namtar with defensive coverage. Overall, the Namtar is very powerful and well worth a modest investment, making an excellent core mech for the discerning commander.

When the Cogwek Renaissance began in the early 3300’s, the Clarke Federation military immediately began to look into ways to improve their designs. They streamlined the Namtar’s component compatibility and removed inefficient equipment, enabling engineers to mount an additional port on the chassis for the installation of custom equipment, bringing the total to three available slots for the addition of equipment. Several shield pods were added to the chassis to supplement the custom modules.

The update’s most impressive additions were to the powerplant. Energy directed to weapon systems is increased, further extending their damage potential. The existing overload capacitors were enlarged and several were added to generate double and triple powered salvos with greater frequency. Engineers first attempted to replace the power plant with model that featured more customisation slots but instead settled on replacing redundant and incompatible power control components with a quad-mount of Auto Repairing nanobot swarms to compensate for the occasional Kickback.

Federation military officials have praised the updated package for exceeding their expectations. The Namtar is the only mecha design to receive additional equipment slots since the beginning of the Cogwerk Renaissance. 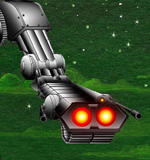