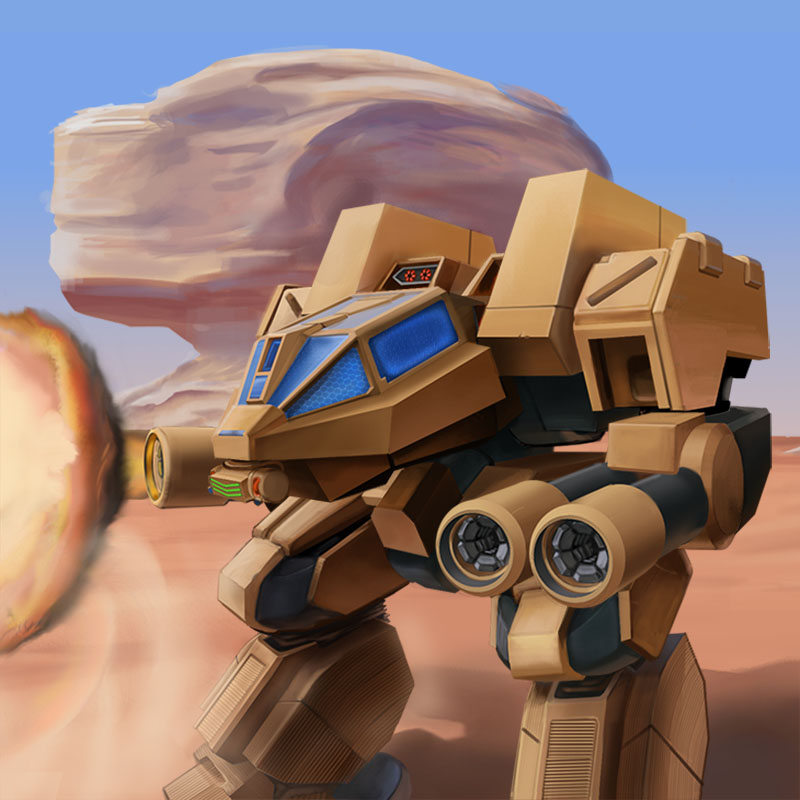 Tank-like and intimidating, the Buchis is the mecha of the warrior. It was created for long-term battles, with sturdy armor and shields. To be given command of such a machine is a high honor in the Society of Cogwerk Planets, and indicative of a long and prosperous career. As such, they are very popular with generals, who will sell the mecha after their retirement to finance a luxurious life style. Most of these Buchis end up in museums or personal collections, but many have made it to the pirate factions.

The Buchis is built as a fortress buster. The direct fire weapons focus of Lasers and Projectiles enable the Buchis to engage enemy formations or strong points head on. Heavy shields give it staying power.

Cogwerk engineers designed a new A.I. for the Buchis. The Devlin class A.I. features a large battery of anti-mech programing and offensive electronics. Its high concentration of jamming signals and false commands fed to enemy mecha cause system shutdowns and failures more often than nearly every other mecha currently in production. A high degree of analysis of the movement profiles of opposing mecha aid the pilot of a Buchis to land frequent direct hits which deal considerable damage especially with Laser and Projectile weapons. Long range IFF scans allow the A.I. to direct fire onto incoming bogies. A minor amount of processing power is dedicated to armor analysis of enemy units enabling the Buchis to land a hit on a vulnerable or weakened area and creating a “one shot, one kill” result. The Devlin will support a pair of custom equipment devices.

The Scarsdale Antimatter unit was chosen for the Buchis due it its suitability to upgrades to its Niode matrices. While the size of the mecha precludes a great deal of speed a fully upgraded model will yield a +2 over combat optimal. A triple mount of upgrade slots add to the overall performance of the powerplant. The high power bursts of energy from the antimatter reactions are directed to the weapon systems generating frequent and powerful overloads of three times normal output.

To keep with the design requirement of durability and battlefield longevity the chassis has multiple shield pods mounted to protect the mech from Trample type area attacks. The common tri-mount for chassis equipment was chosen for its compact size and proven reliability. The space saved allowed the engineers to install a full suite of five heavy shielding modules. The Buchis is the smallest mech to carry a complete overlapping pentagram shield configuration.

A Buchis in the line of battle will cause even the bravest of opponents to reconsider the fight. Many legends are told of one Buchis that withstood an entire Shogunate platoon, allowing the citizens of a small village to escape. The mecha is certainly strong enough to go the distance in any battle.

In the early 3300’s Cogwerk engineers working with Talbus Arms reworked the design to enhance its usefulness on the battlefield. Again the offensive electronics of the Buchis were given priority. Increases to all aspects of the AI were improved. Weapon yield due to concentrated fire, anti-mech viruses, Trample attacks against opponents and “Crit-kill” probability all received upgrades. The powerplant expanded in both the area of speed and weapon overload frequency. Trample shielding was also added to protect against trample attacks.

The Chopper is fast and dangerous, like the Panther Wheel cannon that inspired its design.

Hit 'em with lasers and slash back blazers.