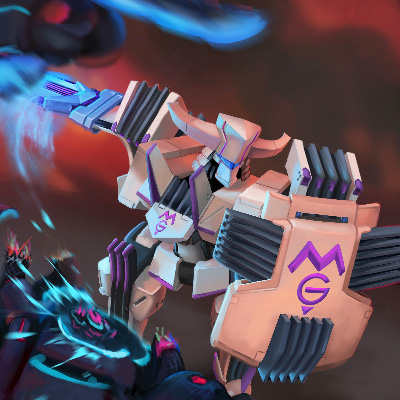 The letters MG emblazoned on the chest and shield of the Guardian Class are the first details noticed when the mecha comes into view. They are not simply painted on like camo or unit specific color schemes, they are part of the construction of the machine itself. They are a constant reminder of why this mecha was created.

The Guardian Class mecha was awarded only to pilots who showed exceptional prowess on the battlefield. The script is translated to the common language of the galaxy from the Craftsmen’s native tongue. The letters represent the words Mortaeii Gustorae which means Defender of Mankind. Mortaeii Gustorae has become both a battlecry to challenge a foe and a salute to acknowledge status among those who possess this rare and powerful mecha.

The Guardian was invented in an alternate timeline from our own. In this timeline, neither the Mercenary Clans nor Drochah and the League of Ages existed until 3323 when one of Drochah’s time travelling forms appeared and began to enslave the inhabitants there. In desperation, The Craftsmen of that timeline opened an access point between time/space that allowed pilots to download their consciousness into a waiting clone body. The pilots of the Mercenary Clans who volunteered for the procedure found themselves in younger bodies that had to be retrained to achieve the skill levels of mecha combat that they once had. Although they did have the advantage of their memories of fighting, and defeating, Drochah in their own timeline, the pilots of the Mercenary Clans faced a difficult uphill battle. 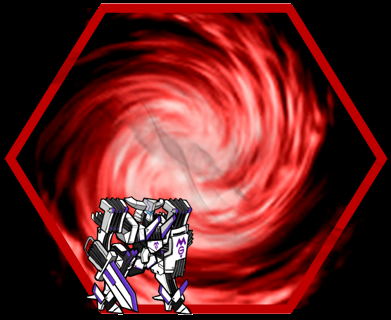 The A.I. constructed for the Guardian is the Kasparov-A. This A.I. features a deadly array of offensive programming and a unique procedure to implement them; they are focused through the Vorpal Blade, the sword carried by the Guardian.

Multi-threat assessment programming allows enemies to be targeted while attack Splash damage will affect any target in close proximity to the primary, inflicting up to 16% of the original salvo over a large swath of the battlefield. A redundant battle interface can lock onto a second enemy mecha with a full powered Fork salvo with over one third of shots fired, allowing the Guardian to easily engage multiple foes. The Kasparov-A is linked directly to the Vorpal Blade weapon system, this connection is one aspect that creates the deadly efficiency of the sword. Telemetry from this link translates to Ice Weaponry, increasing output considerably over standard factory settings. At full capacity, pilots can expect to see a 40% boost to Ice weapon damage.

The use of the Vorpal Blade as a focus aids in the Kasparov-A’s ability to find weakened armor or vulnerable locations on a foe to direct a one shot Crit-Kill. Fully upgraded, more than one in ten shots fired will find a critical failure point and destroy an enemy mecha.

But the Vorpal Blade is not just a focus, it is a weapon in its own right. In close combat a direct hit from it will destroy the enemy every time no matter how heavy or pristine its armor may be. It is still not fully understood how the Vorpal Blade functions, but many pilots are not concerned with that. They are satisfied knowing not only that it works, but also that it will destroy an enemy mecha 100% of the time if a direct hit is scored.

Fully upgraded, the Kasparov-A can be equipped with six custom modules.

Powering the Guardian Class is the Digrageth powerplant. Manufactured in the Metaverse, the inner workings of the Digrageth are largely a mystery. Initially faster than all typical BFM mecha the Guardian maintains its speed advantage through all stages of upgrade due to the large capacity to support upgrade modules. The massive power output of the Digrageth is sufficient to propel the 105 ton mecha at respectable combat speed when fully upgraded.

The alien armor of the Guardian Class is as impressive as it is unique. Using several compounds that do not exist in our universe, the Guardian’s armor is superior to known composition and fabrication techniques, giving a greater degree of protection while providing considerable savings in both weight and volume. The highly flexible and adaptive support beams used in the construction of the chassis support armor is highly resistant to most forms of attack. Small shield pods are mounted around the chassis reducing any incoming damage. At its full potential, this armor will absorb more than one third of energy directed against it.

The large physical shield carried by the Guardian Class is not just for show. It is particularly effective against Laser and Missile attacks and will render all but the heaviest of strikes null and void. Furthermore, an unprecedented eight additional ports are provided for heavy shielding modules to enhance the integral defensive systems of the Guardian.

The Guardian Class mech lives up to its name and motto. Superior defensive capabilities ensure that Mortaeii Gustorae is more than just a phrase, it is the standard to which pilots aspire and the manifestation of certain doom for the enemies of Mecha Galaxy.

Guardian comes fully equiped with:
Vorpal Blade cannot be unequiped from its mech 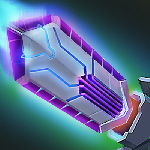 One, two! One, two! And through and through The vorpal blade went snicker-snack! He left it dead, and with its head He went galumphing back. 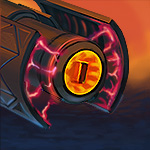 A raging inferno integrated into neural controls. Any threat that gets the pilot’s attention is engulfed in overwhelming amounts of fire.

A raging inferno integrated into neural controls. Any threat that gets the pilot’s attention is engulfed in overwhelming amounts of fire. 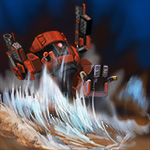 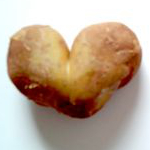 WTF? Did you just throw a potato at me?