In 3329 the Society of Cogwerk Planets under a brutal and extended onslaught from the Armies of the Pirate King. The collective Cogwerk military, especially the Legionnaires of Galactic Trade had borne the brunt if the assault and were near collapse from attrition and just plain exhaustion. Even the reinforcements from the Mercenary Clans were only a cure for the symptoms and not a treatment for the disease. The economy was near collapse as well after dealing with the strain of pirate raids and theft for years on end. Times were dark for Cogwerk and if a solution was not discovered soon the Society of Cogwerk Planets faced extinction.

One solution did present itself in the form of the Revenant Mecha. Designed by the reclusive and mysterious hermit engineers from the Brotherhood of San Lorenzo, this mecha set new standards for the fairly new field of super heavy engineering for 105 ton mecha.

The Revenant appears to built around the concept of the best defence is a good offense. The Asteraoth A.I. features a superior line of sight targeting system that boosts the efficiency of Laser weapons by well over 50%. Added to this increased output a secondary threat monitor will deliver considerable Trample damage to any approaching hostiles. Also included in the Asteraoth’s programming is the Ophanim grade anti-mech virus. Projected into an enemy mecha, it will cause the opposing mecha to generate an internal EMP blast that will shut down all systems. The Ophanim virus is so effective, the project to develop it was abandoned over fifty years ago as the Cogwerk Minister of Defence thought it too dangerous for use. The hermit engineers thought the threat to Cogwerk was so dire, it would be dangerous to use anything less. The Asteraoth is equipped with seven ports for the addition of custom hardware.

Powering the Revenant is the Spectre power core which also focuses on enhancing the offensive capabilities of the design. An enormous array of dynamic overload capacitors are built into the power system. Their unique interconnected relay system allows for the generation 1.5X, 2X, and 3X overload salvos at a prodigious rate.

As with all super heavy mecha, the Revenant is relatively slow moving when first off the assembly line, but any speed deficiencies are quickly offset by upgrades and the eight available slots for engine modules.

The Chassis of the Revenant contains several shield pods that will absorb a small amount of incoming weapons fire and tuned shield emitters that provide a great deal of protection from Ice attacks, but the primary defense mechanism is the Echo Bane active armor system. Tied into the A.I. the armor mimics its surrounding on visual, infrared, and magnetic spectrums. This coupled with the Asteraoth’s electronic interference and false positive data fed to enemy units gives the Revenant the greatest Dodge capability of any existing super heavy mecha. It also makes Fork attacks against it extremely ineffective. There are eight ports on the Chassis for the installation of custom equipment and a full suite of five mounts for heavy shield modules.

During final shakedown testing of the Revenant, San Lorenzo engineers were testing an automated unit in the Yomi Gravity Reefs when they stumbled into a still active, but malfunctioning Forerunner time dilation booby trap. Instead of projecting the victim thousands of years into the future, the close proximity of Drochah’s fractured Chroniode projected the mecha to thousands of possible timelines. This serendipitous event resulted in many of the mecha being discovered by both the Cogwerk military and the Mercenary Clans alike. This accidental boost in production is considered to be one of the major turning points in Cogwerk’s war against the Pirate King. Not the beginning of the end, but perhaps the end of the beginning. 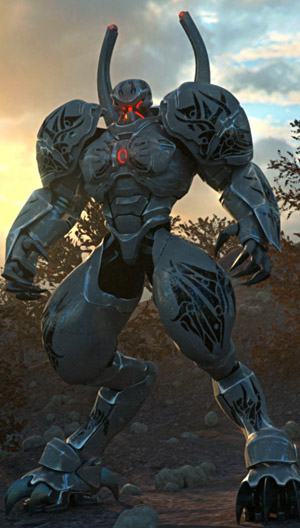 The last thing your enemies will experience.

The last thing your enemies will experience.

Revenge served at the speed of light.

Revenge served at the speed of light. 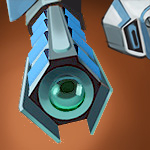