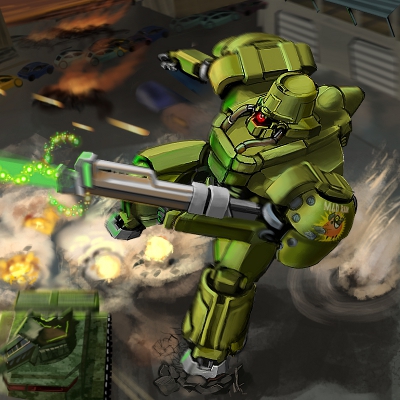 The Holmes mecha was designed by Consolidated Mecha to serve as a mobile command unit for guerrilla attacks and is found in battalions throughout the galaxy. This design focuses on utilizing scanners, radars and deep-range sensors, all built into the Consolidated type 6 A.I. The type 6 is the base model of the Consolidated A.I. line and has proven to be reliable and effective.

The Holmes comes out of the factory ready for battle and is loaded with quadruple Cornerian Ion blasters. To maximize the Holmes' agile design, the commonly-used but bulky shield emitters were intentionally omitted from the schematics. Instead, the Holmes was designed to accommodate multiple pieces of chassis equipment. These chassis elements help the Holmes react more quickly than many of the other small mecha and subsequently survive longer in battle than many commanders expect. A later design upgrade also added several self-generating shield pods that can be utilized by more experienced pilots.

The Holmes is outfitted with a small internal engine, the MagnaStar. Produced by Shinayashi Corp., the MagnaStar is manufactured exclusively for use in the Holmes. The MagnaStar gains several moderate boosts to its speed as the Holmes is developed. At higher levels, the speed boosts are even greater, allowing the Holmes to produce a withering fusillade of fire for speedy attacks when the tide of battle changes.

Generals and their staff often use the Holmes for extended fights, permitting them to make strategy changes on the fly. The benefits of this light mecha make them popular with pirate captains, especially those who prefer to let their minions incur any risk. Due to it's popularity, the Holmes is often painted with the colors and insignia of the government, clan or gang that it fights for.