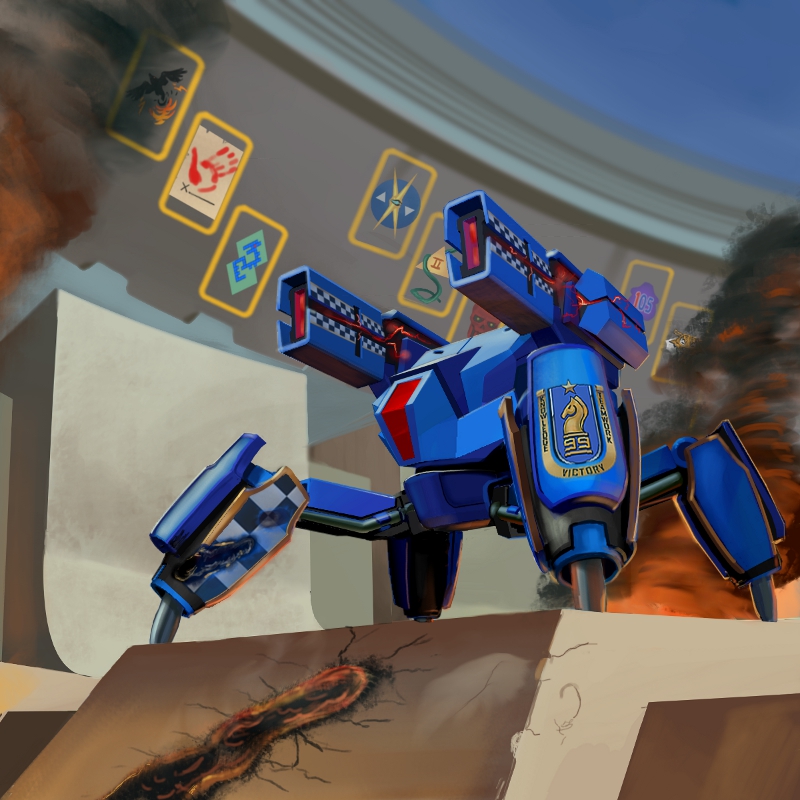 When The Craftsmen created the Zadok, they stated that they want to award an exceptionally well-crafted mecha to clans that display exceptional mettle and teamwork on the battlefield. Individual accomplishment is a worthy goal, to be sure. But The Craftsmen recognize that a group is more than the sum of its parts, since this is true for The Craftsmen themselves. A team is comprised of many individuals working to achieve a shared goal. When they are successful in besting all of their opponents, the team should be commended and rewarded with a fitting prize.

And so they produced The Zadok. Its design is similar to The Craftsmen's Nephilax mecha, the coveted prize for victory in the King of the Mountain events held regularly in the arenas. Whereas the Nephilax was designed to fit the needs of hot-shot pilots on solo missions, the Zadok possesses state-of-the-art communication and encryption technology, elements that are particularly helpful when battling as part of a team.

At the end of each Clan Wars tournament, pilots from victorious clans return to their hangars to find a Zadok awaiting them. As yet, it is not known how the Craftsmen circumvent secured Gateways and accomplish this task. They seem to have the keys to unlock any gate in the galaxy. Over the years, many pilots and civilians alike have tried to locate this technology and failed to do so. The Craftsmen guard this secret very carefully.

The Zadok is truly a technological masterpiece. Its A.I. enhances the power output of every known weapon type in the galaxy while its systems boost the performance of various aspects of mechanized combat. The weapons and Electronic Warfare packages are controlled by what has been dubbed the Archangel A.I. The Archangel's quick scanning and analysis programs provide the pilot with optimal timing for fire control as well as pinpoint targeting to strike opposing mecha in vulnerable or on already weakened armor plates thereby generating greater than expected offensive power. Military-grade computer viruses are directed at enemy targets, occasionally forcing them to shut down and restart in the heat of battle. This provides a Zadok pilot with a target that is nearly defenseless for a brief period of time. That can be a tremendous advantage in battle.

Powering the Zadok is a power plant unlike any produced on any known world. Officially referred to as Power Plant: Craftsmen, Class Two in technical and engineering journals, pilots simply call it the Hercules. The speed and power generation of the Hercules is unmatched in other mecha of this size. As with the shielding, added niode matrices unlock its potential and increase efficiency. A design feature unique to the Zadok is the symbiotic relationship between the A.I. and the power plant. Firing solutions are fed from the A.I. through the Hercules and then to the weapon systems. When a hard lock is achieved on the target the Hercules will overload the salvo with any available power further boosting the already optimized weaponry.

The chassis of the Zodak is also very impressive. Using the same Tetrapod Movement System as the Nephilax, the Zadok's design is even more maneuverable and boasts quicker reaction times than the traditional popular designs commonly known as "Battle-Cats." This is especially true when the Zadok executes lateral shifts in broken terrain. Several self-generating shield pods are also attached to the chassis. As the niode matrices are upgraded, the shields operate with greater and greater efficiency. Highly experienced pilots have reported that some shots just seem to bounce off the Zadok, making it seemingly invincible at times.

The Zadok's a broad range of abilities are enhanced by triple ports installed for customization and upgrades of the cockpit systems, chassis, and power plant. Three slots are also provided for the addition of heavy shielding modules.

Beginning around the year 3300, a technological Renaissance occurred throughout the galaxy. The Craftsmen were at the forefront of new research efforts and at the center of a new era of cooperation and sharing of information, research, and technology among the Major Powers and Great Clans of the Galaxy.

The valuable mecha produced by the Craftsmen all received a huge boost in combat effectiveness during this time, including the Zadok. The Archangel system was developed to track secondary targets, allowing the pilot to suppress or damage enemy mecha in the vicinity of his primary opponent. Added offensive programming for the Electronic Warfare suite enable the Zadok to disrupt and Freeze an enemy in one out of every five encounters. Targeting efficiency also improved and with the upgrades to the Hercules power plant and overloaded salvos become more and more common.

Incredible advances are unleashed from the power and motive systems. The already fast-moving Zadok boasts an impressive increase in speed that gives it a significant advantage in combat. Defensive systems are enhanced as well, as the shield pods generate greater levels of overall protection. Specialized protection was also added against area of effect type attacks, particularly against trample attacks. This all results in a statistics package that is the envy of many other mecha.

The Zadok is truly a work of art. In the hands of a skilled pilot, it is a fearsome sight to behold.