Created by the Most Esteemed Brotherhood of San Lorenzo in the Society of Cogwerk Planets, the Talon is only their second fully independently designed and produced mecha. Designed to be a hard hitting brawler this mecha nicely fills a power gap in mid range units.

The hermit engineers of San Lorenzo created a new type A.I. for the project in order to take full advantage of several new technological advancements in recent years. The Kinsey Refocuser’s programming is centered around multi-target attacks providing a baseline for Fork attacks from the moment it steps off the factory floor. Target analyzers continuously monitor opposing mecha for weakened armor plating or other vulnerabilities in order to place a one shot Crit-kill. The system is tuned to take advantage of the electromagnetic surges inherent to many Ice weapons and yields an overall output enhancement to any such weaponry mounted on the mecha. Fully developed the Kinsey Refocuser is able to control five additional equipment modules.

The Chassis is constructed with integral Heackel Stabilizers to maximise the potential of a multitude of defensive and shielding options. At first glance the on board shields appear to be fairly standard. Heavy shielding against Ice weapons are paired with additional protection both Splash type area attacks and multi-targeted Wide Fork attacks. The design next added the newly developed Reflect type shielding that diverts incoming weapons fire away from the mecha.

This is a significant breakthrough in mecha design as the Talon is one of the first mecha to have this type of protection built into its design. Even more impressive as an engineering marvel is the inclusion of a pinpoint Crit-Shield that converges shielding energy over any battle damaged armor. Pilots should note that the Crit-Shield is not otherwise available at this tonnage on any type of equipment.

The Chassis is provided with three slots for the addition of any needed equipment and four ports are included in the design for the installation of heavy shielding modules.

Powering the Talon is a high efficiency Hadron Density Migrator. Another original San Lorenzo design, this unit provides enough energy to move the mecha at +2 over combat optimal when it leaves the factory. This power is multiplied six times as the mecha is developed.

For additional offensive punch the Hadron Density Migrator is equipped with a significant array of Overload capacitors in a variety of ranges. Fully upgraded the likelihood of every salvo being overloaded is quite high. Additional capacitors added to the four control ports on the power plant can make this a near certainty. 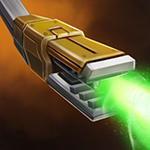 Bleed your enemy and watch them fall.

Bleed your enemy and watch them fall.

Shreds armor and stops your enemy in their tracks

Shreds armor and stops your enemy in their tracks