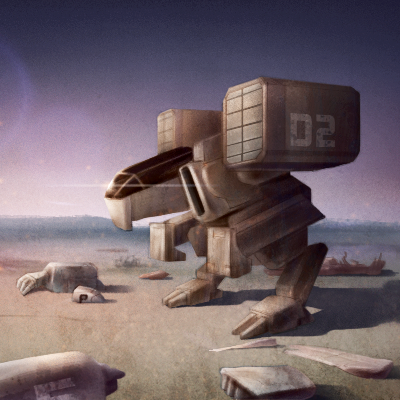 The Dread is a moving artillery battery that exists purely to wreak havoc on light infantry mecha. A mainstay of Hegemony battalions for hundreds of years, its capable of laying waste to an entire team of Red Ants or regiment of Anzu troops.

This trusty middle-weight mecha came into prominence during the battle for the Kalin Pass gate, a legendary gate in contested space between the Hegemony and Shogunate forces. Using its highly developed missile weapon system, dozens of Dreads aided in a quick siege that turned the battle in favor of the Hegemony.

The offensive capabilities of the Dread are built around the Trebuchet class battle computer. The system uses advanced radar imaging and triangulation sub-routines from data gathered from any friendly units in the area to saturate the battlefield with heavy missile fire. When in siege mode, the trebuchet has the ability to direct ballistic fire over the horizon and can severely damage incoming reinforcements attempting to join the battle. Multiple dedicated control channels enable it to course-correct salvos in flight to increase damage to the target. As the Niode matrices are upgraded, this concentration of fire becomes increasingly devastating. The Trebuchet will hold up to four custom upgrade modules to further enhance its effectiveness.

The Dread uses the Star Factory Sunburst power plant, a design that is specifically configured for its fire-support role. Above-average combat speed allows it to keep pace with assault units without diminishing available ammunition storage. The Sunburst has three available ports for mission specific equipment, enabling it to accept significant personalized modifications.

For the chassis, Star Factories turned to Griffin, Kash and King for a durable design that is also easily modified. The gear they received is even more versatile than the original specifications, which suits the Dread very well. The G,K and K type 400(D) ultimately became the backbone of the Illyan military. A larger version is used in the Buchis mech and a more compact model is used for the Shocklite. The type 400 has dual ports for additional equipment and triple mounts are provided for heavy shielding modules.

Major modifications were made to the Dread's capabilities in the early 3300s during a fury of competition among manufacturers throughout the galaxy. The addition of a sophisticated secondary target-tracking system to the Dread allows the pilot to engage multiple targets with a high degree of efficiency. This will enhance the already deadly bombardment capabilities inherent in many missile weapon systems. Area saturation algorithms additionally empower the Dread to damage all nearby targets, as well as long-range hostiles.

Dread has a name that strikes fear in the heart of its opponents every day. 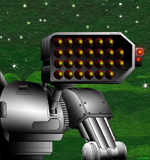 Falling black rain strikes a balance between quantity and firepower. Immolate two enemy units at once.