The Meiji Shogunate commissioned the Nifthel shortly after their first encounters with Hegemony mecha. The Hegemony's fearsome and imposing Cindron with its potent flame weapon systems were wreaking havoc in battles across the galaxy. A sophisticated answer was needed, something that could combat the fires that raged and spread in those battles.

Emperor Kiyomizu and his attendants approached the hermit colony on Glacion 4J-32 to ask them to design a mecha that could counter the heat from the fire weaponry. Glacion is a frigid waste-world, and the obsessive hermit-engineers who lived there knew exactly what to build: a mecha and weapons suite than were born in the cold. They would fight fire with ice!

Manufacturing responsibilities for the Nifthel were assigned to Alpha Corp, the premier weapons and munitions supplier for Shogunate forces. They built a mecha that was smaller than the Cindron, one that was easier to pilot in tight spaces. Nifthel's user-friendly interface also allows less experienced pilots to bring it into battle, an advantage for Commanders seeking to use greater numbers in the field.

The targeting system and battle computer for Nifthel are constructed around the Burakkuraitoningu, or Black Lightning class A.I. While any military grade A.I. would have been sufficient to run primary functions, the Black Lightning was selected for its compatibility with the Nifthel's secondary offensive suite, the Electronic Warfare package. The hermit-engineers designed a system derived from extreme temperature chemical effects that can counter the speed of enemy attacks. This system employs radar jamming and computer viruses, which disrupt random sub-systems, to further slow the reaction time of enemy mecha.

The Nifthel is a maneuverable mech, exemplifying the Shogunate's preference for martial balance. To maintain this balance regardless of the mission, the hermit-engineers recommended a pair of custom upgrade ports for the computer system, a pair for chassis modification and two for shield modules. The result is a well-rounded combat machine that also carries one highly-specialized ability.

The Nifthel is specifically calibrated for ice weaponry stabilization, ammunition, and targeting requirements, so it can deliver significantly more damage with ice weaponry than many other mecha can. The base model carries 5 introductory ice weapons. Many other ice mecha have since been developed using the technology first developed for the Nifthel.

In 3305, Consolidated Mecha procured the manufacturing rights to the Nifthel and released an upgrade to the high-level functions of the mecha, making significant improvements to weaponry output and electronic capabilities. Building on the slowing effects already developed, engineers integrated technology that could cause a temporary shut-down in any approaching machine. This has repeatedly proven to be a significant advantage in battle, when the difference between a victory and a defeat can be a single shot. 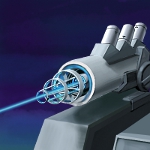