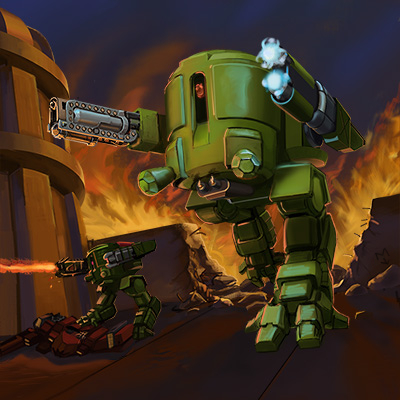 In the late 3100s, Illyrian engineers on the Novum Dolorum research colony demonstrated a novel method of plasma isolation that allowed for the controlled flow of class Z neutron colloids. The technology was hastily developed into a new class of plasma, or "fire" weapons for use on the front lines of the Fourth Cluster rebellions around Orion's Spur.

Plasma technology was eventually modularized for use on standard interchangeable weapon mounts. After extensive development, engineers produced the class of Fire weapons we recognize today. The House of Romulus was the first to see the potential for using this new plasma technology on combat mecha and they developed a design for the first specialized fire mecha, the Cindron.

At that time, Cindron was one of the heaviest mecha available and it utilized weaponry that no one had shielding against, so it quickly became the crown jewel for the House of Romulus. Illyrian Military Command immediately accepted the Cindron design, giving the House of Romulus a significant advantage in their ongoing competition with the House of Strategoi to be the premier mecha supplier to the Illyrian Hegemony. The Cindron has grown to become a feared and legendary middleweight mecha in Hegemony battalions.

The A.I. created for the Cindron is the Spk- R912, also known as “Old Sparky”. The R912 is ideal for the Cindron's main weaponry and offensive focus. Concentration of plasma streams make any Fire weapon mounted more efficient than the production design of the weapon states. The Cindron’s ability to broaden its aim and splash plasma onto nearby targets is a natural complement to Fire weaponry. This effect is further amplified by the Splash feature built into many Fire weapons, boosting an already powerful feature. "Old Sparky" can make use of up to three additional modules for mission specific needs.

The Cindron is equipped with a standard industrial load-lifter grade Trojan-2 power plant that can easily accommodate the power demands of rapid-fire weaponry. The massive size of the Trojan-2 requires the design for the chassis that gives this mecha its unique profile. This power plant’s multi-phase cycle enables the Cindron to generate huge overloads for the weapon systems on a regular basis with sufficient upgrades.

The designers installed two ports for customization inside the niobium alloy chassis created specifically to cope with the shear force and stresses of the Cindron’s top-heavy design. Shock-absorbers that were originally designed for steady handling of cargo were adapted to accommodate sudden movement patterns required during combat operations. Because of the power plant's large footprint, engineers placed the three ports for heavy shielding modules on the exterior of the torso.

In their initial haste to field earlier models of the Cindron, the House of Romulus engineers were arguably overly cautious with the safety margins built into cut-off and valve control protocols. This lead to a plateau of damage output, even with additional upgrades, that was not appreciated by the more experienced pilots. In the early 3300’s, these engineers completed an update package for the Cindron to enhance its operational profile that was designed to meet the needs of veteran pilots.

Much of the update project's focus was on optimizing power output from the increased number of niode matrices around the Trojan-2. Power surges are harnessed to generate triple strength overload blasts from the weapons systems and energy directed into Fire weapons is efficiently converted to excess damage output. The secondary targeting systems are also improved, making considerable gains to accurately directing Splash attacks on opponents near the primary target. Defensively, the Cindron gains several shield pods to augment the heavier custom shielding.

The Vatra Flame likes to leave nothing but smoking rubble in its wake.

Once you can see its eyes glowing, you've entered the range of the demon.

Once you can see its eyes glowing, you've entered the range of the demon.