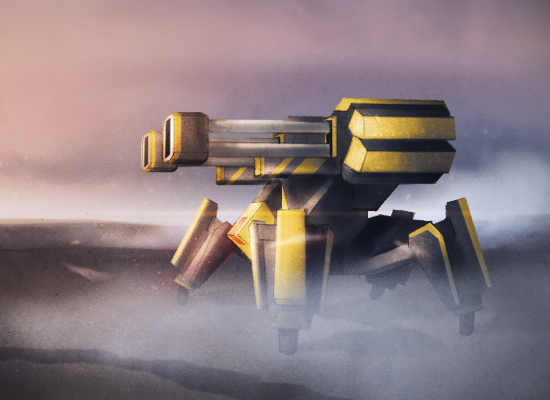 If the great empires and generals of the galaxy could find out where the makers of the rare Nephilax mecha lived and worked, they would do so. The makers of the Nephilax are a very private clan, known only as "The Craftsmen." They craft these mecha and give them to pilots who prove worthy of this special machine. They do not even sell the Nephilax to those skilled pilots, they only award them as a gift to show their appreciation for an impressive individual pilot's performance. The gold alloy plating declares its status as the ultimate gold medal.

The Nephilax is without a doubt the most powerful mecha in its class. For a prize mecha, the Nephilax is a well-balanced and practical tool of war. It's equipped with the intricate Craftsmen Tetrapod Movement System, a revolutionary system that was first designed for the Nephilax. The Tetrapod Movement System and has proven to be a highly agile system, so the Craftsmen continued to use it in later designs. Many larger mecha cannot move as quickly as the smaller tonnages but even as a medium-weight mech, Nephilax has formidable speed advantages. Additional shielding pods mounted on the Chassis also protect the Nephilax from various attacks.

The A.I. mounted in the Nephilax is aptly named the Eye of Horus, or simply "the Eye", as it is ideal for hunting other mecha. Built-in Target Assist enhances the pilot's accuracy. The standard Craftsmen optical firing solution programming is also included, generating above-average damage from all types of weapon systems. Projectile systems gain an additional boost from this programming making Cannons a very popular choice for the Nephilax. An Electronic Warfare systems is mounted in the cockpit to slow enemy mecha, making them easy targets for the pilot.

The Nephilax carriers triple-redundant customization slots, allowing the pilot of further enhance its already impressive arsenal. While the Craftsmen's later Zadok and Vizi mecha use the Hercules power plant, the Nephilax mounts the larger Colossus model. The Colossus is faster and has a greater power output off the assembly line. The Nephilax will also periodically generate weapons overloads, enhancing its already impressive damage to target profile.

Beginning around the year 3300, a technological Renaissance began throughout the galaxy. The Craftsmen were at the forefront of new research efforts and at the center of a new era of cooperation and sharing of information, research, and technology among the Major Powers and Great Clans of the Galaxy.

The Nephilax update package of 3306 transformed this mecha from a dangerous opponent that still had some room to grow into a power house. Advances were made in the targeting algorithms, helping to ensure that all weapons are even more likely to hit the target. Individual weapon damage continues to exceed factory standards at an even larger margin, while the addition of a sophisticated tracking system allows fire to be directed onto incoming enemy mecha.

As the premier mecha in the Craftsmen line, it is only fitting that the Nephilax benefited greatly from the new technologies unlocked from the niode matrices. On the defensive side, the addition of protection from area attacks such as Splash and secondary targeting systems like Fork add considerably to the Nephilax's endurance in battle. The shield pods' function also increases significantly at multiple stages.

The most exciting improvement in this update was made to the Modular Overload Capacitor. When a target lock is achieved, any excess power stored in the Capacitor is used to generate an overload. As with many Craftsmen designs, the capacitor has a three-stage function. The tri-compartment design can generate a 1.5X, 2X, 3X or any combination of the three as an overload. When all three are fully charged, a devastating 9X overloaded blast will cripple or destroy even the largest of mecha.

Many will try to earn one of these impressive mecha from the Craftsmen. Pilots who prove that they are capable of handling themselves in the high-pressure competitions in the King of the Mountain tournaments will really have a chance to see the Nephilax shine.