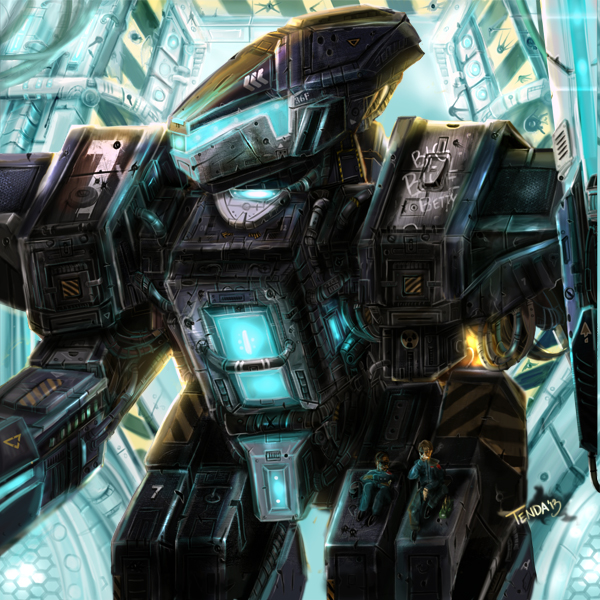 The Freon mecha is one of several mecha made by Alpha Corp that utilizes ice weapons as its primary offensive array. At 70 tons, the Freon is quite often deployed as a medium brawler mecha.

Heavy enough to destroy enemy scouts and skirmishers, the Freon is also fast enough to outpace Huge and BFM class mecha. It is commonly seen in King of the Mountain contests and many pilots use it as an integral part of maximum weight class Specialist formations.

The Freon’s Frostech A.I. is specifically designed for this mecha. It contains a considerable amount of Anti-mecha programming designed to interfere with an opponent's targeting sensors and ability to react to the fluid nature of the modern battlefield. These programs effectively mesh with the similar Slow effect found in many Ice weapon systems. The modular Frostech can support five additional custom program when fully upgraded.

Providing power for the Freon’s systems is a Magnus Lambda Fusion plant. This powerplant generates enough excess power over the motive needs of the mecha to charge the 2X overload capacitors on 15% of shots fired. This is a welcome boost to the firepower of the Freon. Up to four custom equipment modules may be added to the power system to fit the pilot’s mission-based needs.

The frame of the Freon is constructed using the same exacting specifications that are used for hazardous environment mining rigs. This high tech Chassis mounts four slots for additional equipment and carries three slots for heavy shield modules.

In the early 3300’s, the Meiji Shogunate successfully made some small reversals on their significant territory losses suffered at the hands of the Illyrian Hegemony. One of the planets captured in this particular Shogunate offensive contained the manufacturing complex of one of the Hegemony’s newest mecha of the time, the Freon.

As a result, the manufacturing for the Freon changed hands from the Hegemony to the Shogunate. This was a notable loss for the Hegemony, but they were too busy defending their other territories to put together a force to retake the planet. Over time, the Hegemony appears to have accepted the loss and the Shogunate’s Alpha Corp has become the Freon manufacturer.

This reversal of fortune is merely one of many in the long running feud between the Shogunate and Hegemony. Over the years their war to control technology has swung in favor of one or the the other, but neither side can claim a clear victory.

Alpha Corp’s engineers had carefully documented the Freon’s development and were able to use that information to refine the mecha’s design. When Star Factories first started developing the Freon design, the Freon class was designed with the intent to aid in snow and ice removal and to facilitate road clearing on Hegemony worlds.

Innovations in heat exchanges and the use of quantum reactions regarding temperature lead to the development of systems that perform well in frigid temperatures.

Induction of heat also created even more power to be used by an energy conversion process that created power out of heat/cold exchange.

The Freon got a chance to prove its value when pirate raiders, cunningly disguised by a icy comet, attacked a fringe world frozen helium processing facility. Using only jury-rigged thermal removal units and re-purposed superconductor coolers, the brave pilot of this mecha single-handedly defeated the pirates.

These early Freon were already equipped with an impressive array of tools and weaponry for preventing heat expansion and entropy. Field testing lead to improvements in its superconductor coolers, allowing for greater efficiency and decreased latency. Internally fed and mounted armaments eliminate any power drop-off and decrease risk of tactical disarmament and malfunction.

Novum Delorum’s Chief of Security forces, Tory was once overheard saying, “May the icy chill of death be nothing compared to frigid embrace of a Freon.”