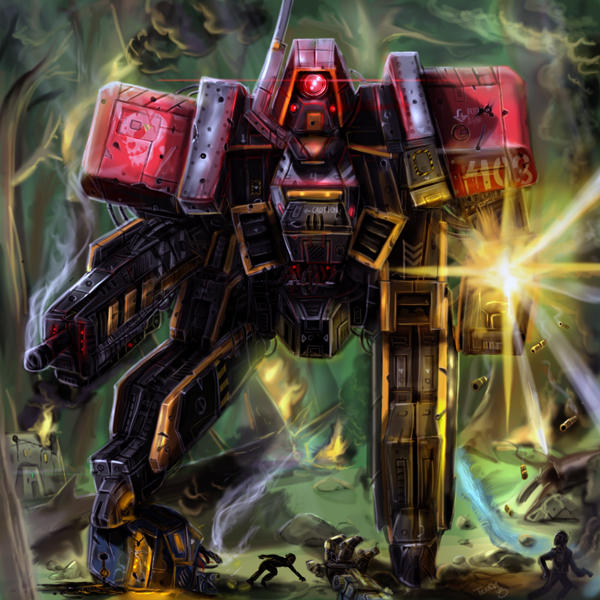 As a protracted benefit to pooling the resources and research on different mecha designs, various free enterprise groups have at different times sought to reappropriate some of Star Factories' designs for their own purposes. The Ammonite is theoretically a close relative of the Hoplite mecha, but practically this is not so.

Piggybacking off of the enthusiasts' community for the Hoplite, a group of engineers decided to conduct a series of tests on its shielding technology. A reverse-engineering of these shielding technologies revealed that much of the kinetic energy that was absorbed from the shielding could be redirected to different systems of the mecha. With the Hoplite, this energy "inefficiency" was often more of a benefit, because it could be redirected to other Hoplites attached to it.

The course of action was to redirect this energy runoff back into its weapons systems. Favoring projectile weapons, the kinetic energy can be overcharged with most rail guns to create an even more deadly armament. The side-effect of this is that it has to sustain a large amount of energy over time in order to deliver what is, in most cases, a coup de grace to the enemy mecha.

In general, this is only realistic for the highest level Ammonites.

In combat environments, a high level Ammonite is a fantastic late-game wild card. Often able to take three or so mecha on by itself, it can quickly dispatch one with a triple overcharge, hit the second with a crit-kill, and hold out against the other one with its shielding. This dependency should not be over-exploited though, for in the off-chance that the kinetic dampeners are targeted or damaged, the overcharge function is rendered useless.

The Ammonite is a high-risk, high-reward offensive mecha for those pilots that enjoy living on the edge. Use with caution.