The true origin of the Gigus design is a mystery. Most mecha historians point to the Forerunners as the designers, although there are a few who theorize that this mecha was first created by the unidentified foes of the Forerunners.

First produced in our galaxy by Alpha Corporation in the Shogunate, the Gigus has a fearsome Fire and Missile weapon focused design. The Factories that produce this mecha reside within a section of the galaxy that changed hands from the Shogunate to the new Minor Power, Sengakuji Reaches, in 3307. Sengakuji Reaches won its independence from the Shogunate after a bitter civil war in which the two Princes faced off and the Prince of Flowers defeated his brother in battle.

The electronics package of the Gigus is powered by the TL100 A.I. This processor carries an efficient anti-mecha virus package that feeds false commands to an opponent and Slows their reaction times. A multi-target processor searches for approaching hostile mecha and can enable the Gigus to damage any foe before they can get in range to return fire.

The A.I. also contains a secondary multi-targeting system to direct weapons fire onto any enemy mecha in the vicinity. This system augments the Splash function found in many Fire and Missile weapons. The remainder of the processing power of the TL100 is dedicated to improving the damage output from Fire weapons and Missile systems installed on the mecha. The A.I. carries four slots for the addition of custom equipment.

The powerplant selected for the Gigus is the Kobayashi 539. This unremarkable yet sturdy version of the civilian model Kobayashi 500 is more than adequate at providing the Gigus with the power it needs in battle. While somewhat less speedy than other versions, it lacks the vulnerabilities that plagued some of the early Kobayashi models. The Gigus relies on the four ports for custom engine equipment included in the design to reach speeds above combat optimal.

Many stories have been told of the Gigus’s early development. The energy emissions through the sizable vents in this mecha’s exterior plating have ignited the imaginations of pilots both young and old, motivating them to create their own stories about where they believe the first Gigus was created.

One of the tales repeated most frequently claims that these terrifying mechs weren't built by humans... They were grown. Giant, planet-razing monsters unseen and unknown to any library or man. And when they were grown, their organic parts were replaced mercilessly, and simply for efficiency. No issues of synthetic rejection--their biology adapted to them perfectly.

How then was the original Gigus mech acquired? Believers say it was found on a colonization project in the farthest reaches of space--stored in an underwater facility. The facility was abandoned. With trepidation, and a good amount of foolishness, the Gigus was ferreted away.

This Gigus was a living machine with adaptive biology that allowed its armor and the weaponry to all function as organs as well. Grizzled old pilots will tell new recruits that the human pilots who had the chance to meld with this incredible creature had to have an extraordinary pain threshold. Fortunately, the armor and bionic shielding could adapt to whatever weaponry they were exposed to, protecting the pilot.

Legend says the beast’s weaponry fed off the immense bioelectric and thermal radiation radiating from the beast. It was immune to most freezing and electromagnetic weaponry. The arm-mounted blades would spike in power when the creature's stress increased.

Pilots who visit the Jungle Moon Rizpah claim to have seen a beast that closely resembles the Gigus mecha of today. Many believe that the original Gigus is still alive and living in the jungles. Because of mankind's greed and curiosity, a creation like the Gigus roams the galaxy--and they didn't ask to take it from its owner.

It's origins are a mystery. The first known appearance of this weapon was on the Gigus Mech.

It's origins are a mystery. The first known appearance of this weapon was on the Gigus Mech. 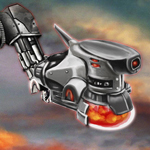 A deep plasma reservoir makes it a little too powerful.