First produced in our galaxy by Alpha Corporation in the Shogunate, the Nakshi was constructed using information found on an ancient data storage device discovered by Shogunate miners.

Many people first believed that the device was left behind by the Forerunners, but after studying other artifacts unearthed nearby, Shogunate scientists questioned the validity of that claim. It was clearly advanced technology, but did it belong to the Forerunners?

After months of research, the Shogunate scientists and historians revealed that the data storage device is more likely to have belonged to the ancient foes of the Forerunners. This was a major discovery. Little is known about these beings, other than they once existed and fought a catastrophic war against the Drochah and the rest of the Forerunners. Even the outcome of the war is lost in time.

The were multiple mecha designs contained in the storage device, but the data was too corrupted to retrieve anything beyond the Nakshi schematics. Setting historical concerns aside, Alpha Corp’s engineers immediately began building a prototype of the Nakshi.

They selected the Ixian-G A.I. for the Nakshi. This A.I.’s programming is largely dedicated to secondary targeting systems. Splash targeting will direct fire at opponents near the primary target. A Fork algorithm will send a second full powered blast into a nearby enemy with a single pull of the trigger. Fully upgraded, this will occur over half of shots fired.

The Ixian-G is well suited for direct-fire weapons like Projectile and Lasers. Both these types of weapons see an increase in their maximum damage potential when wielded by a Nakshi. The Ixian can support five additional equipment modules for mission-based requirements.

Powering the Nakshi is the Tuxon fusion plant. A majority of the energy output of the Tuxon is dedicated to powering the motive and weaponry systems, making the Nakshi the fastest of all 80 ton mecha. A few 3X overload capacitors are included in the design to further increase the damage potential of the weapon systems. There are six slots for the addition of custom equipment on the Tuxon.

The distinctive chassis of the Nakshi is constructed of a proprietary alloy whose formula is still a highly guarded secret. During their Civil War, the Prince of Flowers was able to convince all the engineers who have knowledge of the formula to join him in Sengakuji Reaches, thereby keeping the secret intact. The chassis contains four slots for additional equipment.

Several shield systems are mounted on the Nakshi to decrease damage caused by incoming weapons fire. The main shield pods are supplemented by secondary energy shield pods that can absorb additional damage from Laser and Fire weapons. Five slots are available on the Nakshi for the addition of heavy shielding modules.

It is rumored that the energy absorbed by the Nakshi’s shielding is somehow channeled back into the Nakshi’s systems to boost its power. While this has never been confirmed by Alpha Corp or Cherry Blossom Mechworks engineers, the absorbed energy could be creating the Nakshi’s fearsome glowing aura.

"Behold the javelin that pierces the stars."

These were the first words translated from the ancient data storage device containing the Nakshi’s designs. Over and over again, these words burned in the minds of the Shogunate scientists studying the device. It was similar to Forerunner language, but also clearly distinct.

As Shogunate engineers explored the intricacies of the Nakshi design, they concluded that it is notably similar to the Gigus. They were the first people to suggest that these two mecha may have been created by the same group. After the initial announcement, other engineers began to point out the common features found in the Gigus and Nakshi designs. The basic frame components and sharp angles of the design make the chassis nearly interchangeable. The glowing energy discharges emitted by externally mounted power conduits are obvious similarities. These features are conspicuously absent from the “Dino-mecha” known to be of Forerunner origin. Likewise, the common elements in the Forerunner mecha are not found in the Gigus or the Nakshi.

The factories that produce the Nakshi are located in a region of the galaxy that changed hands from the Shogunate to the new Minor Power, Sengakuji Reaches, in 3307. Sengakuji Reaches won its independence from the Shogunate after a bitter civil war in which the two Princes faced off and the Prince of Flowers defeated his brother in battle. Once part of Alpha Corp, the factories were renamed Cherry Blossom Mechworks by the Prince of Flowers.

Cherry Blossom Mechworks underwent some restructuring after the civil war, but they were able to stabilize and boldly took on the task of producing the Commissar mecha after it was discovered by the Mercenary Clans in 3316. This move demonstrated that they plan to continue to grow their production facilities and compete with the Shogunate’s Alpha Corporation and other major manufacturers. 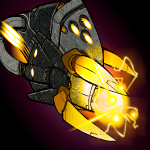 Behold the javelin that pierces the stars.

Behold the javelin that pierces the stars. 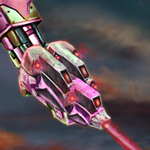