Like the ancient Terran navy ship it is named for, the Dreadnought is a revolutionary design that addresses the way weapon power has outstripped armour and shielding. The Dreadnought ship was designed to sail into the teeth of enemy fire, and use her larger guns to destroy them.

Dreadnought addresses the problems created by the large spaces humanoid and quadruped mechs must devote to their drive legs, and arms, as well as the large target profile the larger mechs create with either the height of humanoids, or the long exposed flanks of beast pattern mechs. The larger the mech, the larger the area that must be protected, and the less armour and shielding you can afford to put over critical areas.

"Mad Dog" Slade was a long time Namtar pilot with Colonel Mathews Raging Vengeance who retired after Clan War V left him badly wounded. He had a radical solution; the Anzu. A much maligned mech, it represented the triumph of great engineering over poor design, as it shoe-horns twenty tons worth of internals into a fifteen ton hull by doing away with the vestigial arms, creating a single common weapon bay, and using the reverse canted bird style legs to give matchless stability, recoil compensation, and a low targeting profile similar to four legged mechs. Of course, they did so in an unarmoured package too small to take advantage of any of these advances. "Mad Dog" saw the potential applied to the heaviest mechs.

Dreadnought removes the useless arm actuators and flattens the torso into a compact turret like design. Its torso boasts the same total armour and shielding as other massive mechs, but concentrated over a smaller area for unprecedented protection. Rather than tucking weapons in a dozen locations across the mech, it concentrates its weapons in two cavernous bays, each protected by armour baffles, recoil compensators, and massive coolant systems. As a benefit to a few large bays, the use of space is optimized, allowing upgrades to weapons, cockpit, engine and chassis system far earlier than most other, less efficient designs. Dreadnought is designed to seek out and destroy the enemy, trading blow for blow until it wins.

Purpose built for the heavy recoil of todays big bore guass rifles, the Dreadnought two main heavy weapon bays boast combined hydraulic recoil systems, allowing the recoil of each cannon to advance the next cannon into battery to fire. Unlike other mech systems which seek to cope with the recoil produced by the larger and larger calibers coming out of Cogworth space, Dreadnought uses that recoil to increase speed and stability of its main guns.

The Mech Dreadnought, like its battleship ancestor, is an all big gun design, with recoil compensated and stabilized bays, the Dreadnought can fire the largest cannons on the move with the precision other mechs rarely achieve at the firing range. Coming standard with paired Exacto Shot and Smoking Gun systems, the Dreadnought can choose between head-hunting mechs of equal power, or trampling over ranks of lesser opponents. The sight of Mad Dogs Dreadnought striding out of the fire, cannons blazing, has been the last sight of many a warrior. 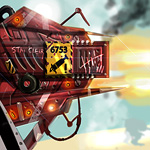 Rounds capable of adjusting their vectors mid-flight, they always ensure hitting your mark.

A field of wreckage. And we know who did it. 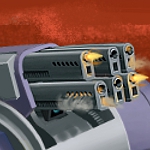 A misinterpretation of historical texts led to this reimagining of an old west classic.