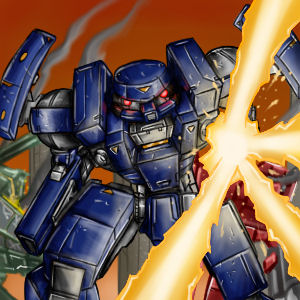 Coming from the darkest, most secret labs on the 5th moon of an un-named planet, Star Factories brings you the Harrell.

Go big or go home. That was the thought behind Star Factories 85 ton, Projectile based mech. They wanted to scare the opposition right off the battlefield, and it worked. The company wanted a "first in, last out" mech. This mech, too heavy to run you down, was never considered for run and gun fights. It was purely designed for heavy conflicts where maximum fire power would be needed, and no oppositional survivors desired, as well as the stand up ability to take a pounding. No pilot ever stepping into one of these felt exposed. Or at least thats what the general public was told.

The dirty truth behind this mechs design was pure greed. The research scientists, at Star Factories, were looking for a bigger R and D allotment from the heads of Star Factories and one of their fiercest competitors for funding was pilot training, expensive to the extreme training and conditioning as well as the surgeries for the neural interfaces. The R and D department figured if they could bring more pilots home alive they would have to train less of them. Hence the allotment to pilot funding would be lessened and funding for R and D increased...

They started by building probably one of the most comfortable cockpits any mech could boast of, complete with hatorade/M.R.E. dispenser and basic personal hygene facilities, then wrapping the cockpit in "inner shielding" to insulate the pilot from any damage the mech may incur. Then they proceeded to build one of the heaviest mechs of its time around the "cocoon" which is capable of ejecting from the mech should it be damaged beyond repair. The rumor of survivability reaching some of the ears at the head of the department brought a rare burst of generosity from them.

The extra funding in design came after the frame work was half-completed so the designers then went nuts with attachment for engine, chassis, and more shielding slots, stealing several ideas from farming mechs known for their adaptability and ability to attach "almost anything". With so many attachments the mech became a power hog and was looking to be one of the most expensive power-hungry mechs ever designed... Bad for funding.

So the design team re-thought an idea from the 20th century era, the capacitor. They used little known crystal configurations and a little bit of quantam mechanics to design the crystal capacitor. The niodes being only capable of releasing energy at a ceartain rate fed energy into the crystal "capacitor" which built up a charge and released as needed feeding the energy to the system that called for it. Reducing flow to systems not calling for energy, with this previously unknown power management system the niode cost for this mech became superfluous and it became one of the biggest crystal based mech of its time.

Unfortunately for the design team their plan backfired, being cheap to make, ultimately durable, and with the ability to hold and power ton after ton of attachments and shielding without shutting down, overloading, or frying its pilots brain with feedback, lead to a sudden influx of pilot testing and training, leading the company to increase pilot funding by 20% while the R and D department got a measly 3% increase in funding. Greed, it wont get you where you think it will.

Juniper Drawl probably (though not absolutely, history is shady on this) one of the first test pilots for the mech, after the capacitors stopped imploding and destroying it and pilot combined, fell in love with her mech. Stating it was the best cuddle partner ever. Nicknaming her test unit, previously known as KB1WLS to Teddy. Stating that there "never was a comfortable teddy to wear until this one, and I will never wear another".

Leading many to wonder, what does she wear while in the mech?