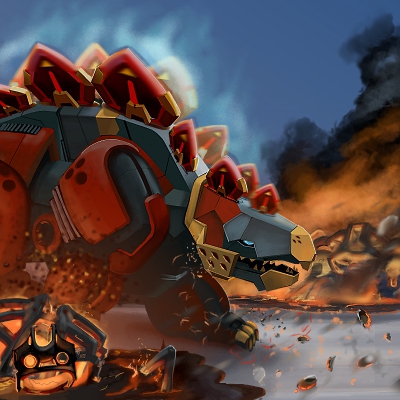 As clans continued to scour the known universe for resources to expand their influence throughout the galaxy, a mysterious discovery in a remote area of the Yomi Reefs may have altered the nature of Mecha warfare forever.

A Chessmen RND scouting party was scavenging for new sources of Niobium among the desolate dunes deep inland on Yomi, and there they stumbled upon the ruins of some sort of ancient mining village. The town, even in shambles, was a wonder in itself. It looked as if all the villages infrastructure had once operated via a series of neural-niode links. The extent of the destruction made it impossible to discern how these links were controlled, or more to the point, who controlled them, but certainly no human could have the capacity to operate so complex a system on his own.

As strange as this scene was, the scouts found more pressing matters to investigate. For it was what they found at the site of the depleted mine that drew their attention�a squadron of disabled Mecha unlike any they had ever seen towered above their Hoplites. They were dominating and fearsome even as they stood shut down, like monstrous shadows of a bygone age. First Scout Richard Laverty reported their discovery with trepidation.

�Command, I dont know if these are Mecha or monsters, but youre going to want to see these things for yourselves.�

Reverse engineering of the beast-like Mecha revealed much about their design, though little of their origins. A complex array of ball-and-socket joints formed a long spine that moved in waves to propel and turn the body with considerable speed and agility, providing surprising maneuverability for such a huge Mecha. Each joint housed its own micro-niode, governed as one by a larger niode in the Mechas central controls. The system offered its pilot unprecedented contact with the Mechas sensors, increasing response time and accuracy. An elegant and innovative weaving of plating and force shields would protect the Mecha without inhibiting its movement, while also providing substantial thermoregulatory power. Combined with its low profile (for its overall size), the machine would be difficult to hit on the move, and resilient to energy weapons or fire.

It was obvious to any student of archaeology that the design was meant to imitate the form of the dinosaur Stegosaurus Armatus, the �armored-roof lizard�. Its creator had clearly studied archaeology himself, as the Mechas design synthesized Stegosaurus millions of years of evolutionary refinement with advanced neuro-kinetic science to produce an incredibly effective killing machine.

The real discovery was not its shape, however. The most awesome aspect of the Mecha was its weapons array. The kite-shaped plates along the back vibrated at impossible frequencies to generate a plasma cone of intense energy. Early tests incinerated all the monitoring shields and equipment the RND teams used on their best fire-based weaponry. As the winds of Yomi scattered the ashes of the first research team, the new recruits spent months just to devise shielding that could withstand the heat waves long enough to get a reading. When they did, it was clear they had a weapon that would ravage any Mecha unfortunate enough to find itself facing this formidable opponent. The Ignis, as they came to call it, would change the very face of battle.

And what of its creators? Who had the advanced technological know-how to engineer such a terrible machine, and where were they now? Why had the Ignis been abandoned, disabled, amongst the ruins of the ancient village? 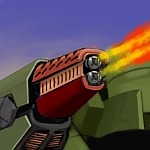 The God of fire demands a sacrifice. 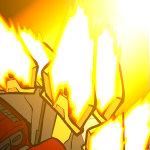 Someone once said, "I want to set those mecha over there on fire, but I'm just not close enough to get the job done. I need a flame-thrower."

Someone once said, "I want to set those mecha over there on fire, but I'm just not close enough to get the job done. I need a flame-thrower." 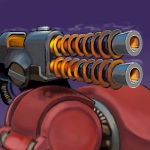 This high precision thermal energy ray was originally designed as a salvage tool.