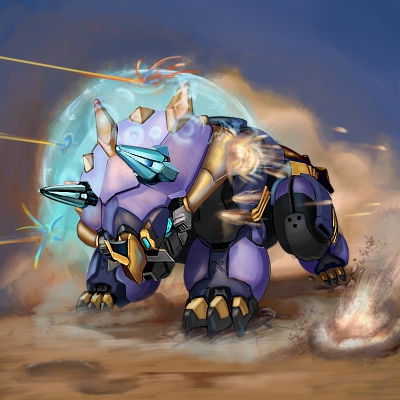 It wasn't long before clan Cyberstorm caught word of new Mechs being found on Yomi. They moved in several teams of scouts to slog their way across the sands of Yomi and determine whether or not the Ignis was the only bit of advanced technology left behind on the planet.

Determined to harness the power abandoned here by some bygone civilization, Captain Arnold Bennington led a team into the old mine, a labyrinth of dead-end tunnels that took weeks to fully explore.

Deep inside the mine, Bennington discovered a slip between two layers of shale that provided just space enough for a man to wriggle through. He did just that, and as he emerged on the other side, he looked upon a vast natural cavern, dominated by the quite unnatural device that lay before him.

It was a Gateway, of sorts. Though it did not bear the usual markings he had seen on other Gateways, there was no doubt that its structure was quite similar�the triangular platform, the niode matrix receptors. In appearance it seemed quite similar to any of the other Gateways Bennington had encountered. The most significant difference was that this one seemed to be shut off. As far as he knew, there was no way to shut off a Gateway. Perhaps, he thought, this one never functioned at all.

It was a question he would have to ponder later, as there was much more to be found in the forgotten cavern. His eyes began to adjust to the dim light, and it was then that he saw them: the unmistakable outlines of machinery, the long shafts of cannons. A squadron of Mecha loomed before him, forming defensive ranks at the cavern�s perimeter. In the dark, he couldn�t quite make out their shapes, but he could see the three sharp horns protruding from their enormous heads. Even with the beasts shut down, the sight of their imposing figures sent a chill down his spine.

It took months to extract the Mecha from the cavern, and longer still to determine what they could do. When researchers finally enabled the Mecha�s shielding controls, they discovered that its creator had solved a problem they themselves had been struggling with for some time. It seemed that the Aspis, as the Mecha was later named, provided the solution to a dilemma plaguing clans in the Mecha Galaxy for some time.

It was well known that some weaponry was powerful enough to penetrate Mecha defenses beyond a single rank of attackers and inflict damage to those beyond. As such weaponry proliferated throughout the Mecha Galaxy, it had been employed to devastating effect, with the limitations of Gateways making its use particularly effective in dismantling opponents before they could even enter the fray. For decades, engineers had sought a way to shield against such attacks, but the technology was beyond their understanding and the answer eluded them. The Aspis turned out to contain the answer they sought.

The saw-toothed frill on the Mecha�s head projected a dense matrix of energetic shielding that prevented attacks from penetrating beyond its ranks. The research team ran test after test to determine how much damage the shielding could withstand. When they submitted their initial findings to Command, they were instructed to proceed immediately to the production phase.

The primary weapon system of the Aspis made use of the three facial horns, which synthesized three energetic blasts into a single point before lazing their target. In many tests, this triple beam obliterated targets with one shot.

The Aspis models they produced maintained their creator�s original design and obvious preoccupation with the dinosaurs of Earth�s past. Its inspiration was, of course, Triceratops horridus, the three-horned lizard. The final design would be as terrifying to young Mecha pilots as its predecessor must have been when the Earth was young.

Bennington continued his investigation of the lost Gateway inside the cavern, though Command told him to forget it. His superiors were interested only in that which could bring them power and victory.

Bennington, however, felt that there was more to this scene frozen in time. He knew that there must have been a reason these Mecha were left here. There was a story yet untold. He was certain that at the heart of that story was the creator of these Mecha, someone who understood more about Gateway technology than perhaps anyone ever had. Bennington wanted to find out what happened to this man, if it was indeed a man at all.

As Bennington returned to the cavern to inspect the disabled Gateway, another question plagued him. The squadron of Aspis he found were in defensive position. Aspis itself means �shield��these Mecha were designed to protect something else. What were they defending, and where had it gone?

It wasn�t until the Gateway switched back on that he got his answer. 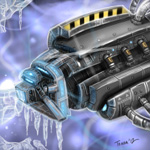 Code named Sikuliaq, an Old Inuit word for ice that covers after the hardest freeze. 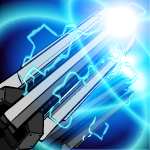 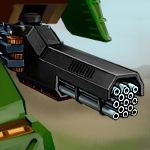 Originally intended only for surface bunkers, these hard hitting guns spray a wall of bullets from multiple barrels.

Originally intended only for surface bunkers, these hard hitting guns spray a wall of bullets from multiple barrels.

White Phosphorous, but better. More reactive, with a thicker layer of smoke both obscures vision and wreaks havoc on the enemy.