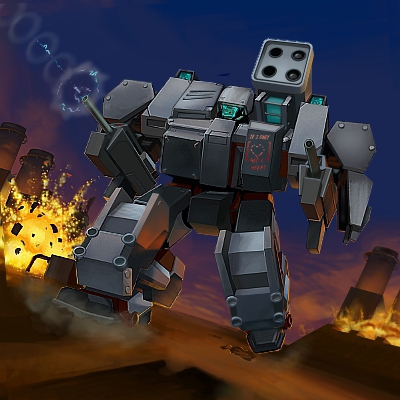 The purpose of massive mecha like the Magnus is force projection. Unlike the stealth and scout functions of light and medium skirmishers or the fast attack demands of the heavy mecha, the massive class's strength lies in creating and exploiting breakthroughs in large-scale assaults. The Magnus was designed to address the two requirements of heavy cavalry formations -- hitting power and staying power.

The Magnus rewards skilled pilots who are able to adapt their fighting style to its unique demands. Utilizing a radical new dynamic magnetic field system, the Magnus takes advantage of Ferrite's intense magnetic properties to couple the massive armor systems and load bearing structures into the weapon, power, and shielding systems. Built-in recoil buffers and magnetic launch systems enhance the Magnus's ballistic systems, making the Magnus a formidable foe on the battlefield.

These innovative magnetic systems augment the Magnus's physical systems and are its most valuable asset. The enhanced power allocated to projectile and missile systems stacks to devastating levels as the Magnus's power systems are upgraded. The magnetic launch systems of the Magnus couple with the machine's shielding systems, increasing the speed and hitting power of missiles and projectile systems. At higher levels, this coupling carries some of the charge to the projectiles and missiles themselves, delivering massive shocks that overload enemy systems. Magnetic loading systems allow the pilot to use internal capacitors to create an extended release cycle, resulting in a double salvo or “Fork” that targets multiple foes.

One of the most common problems for commanders fielding larger formations is incoming trample damage that significantly debilitates the rear rank before they even reach firing position. The Magnus has a massive slab armor system that compares well with other mecha of its class. Using a network of crystal resonance modules through the large armor slabs, the Magnus projects a field from its main armor belt that can deflect incoming attacks. It provides some protection against trample effects and with additional upgrades, the field provides some protection against splash from nearby weapon hits as well. The one downside to this system is that much of the space traditionally given to chassis upgrades is taken by field emitters and regulators, giving it fewer chassis slots than most mecha of its class. Likewise the requirements for heavy shielding of its computer systems have limited its cockpit to only average enhancement options.

Designers focused on building extra power capacity into the hull, so the Magnus receives frequent engine upgrades using increased magnetic plasma compression. Critics of the Krampus designers point out that it starts out strong but tops out quickly -- this is not the case with the Magnus. While a dangerous and capable mecha at any level, the extent of the Magnus's terrible power awaits those pilots who dare to be truly extraordinary.

The 57AM or "Slam" is a rapid fire barrage of powerful charges.

The 57AM or "Slam" is a rapid fire barrage of powerful charges. 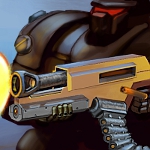