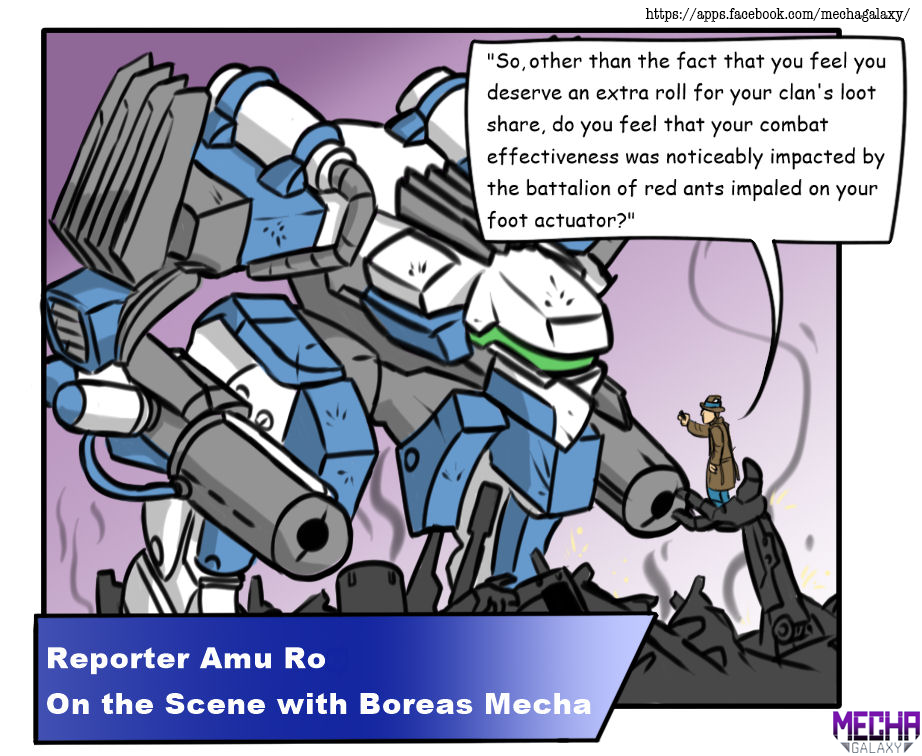 Karak-7 is a relatively unimportant Shogunate outpost, kept functional mostly to provide a cushy, out-of-the-way position for the useless son of a high ranking Meiji official. The useless son, Ruka, gave himself the title of High Commander, and spent his days getting drunk and fat while pretending to be important.

Nobody would ever have heard of Karak-7 if it were not for the mech that came hurtling out of space and crash-landed on Ruka’s head.

When the guys who worked on K-7 tell the story, they look over their shoulders first. They tell you about the reports from overwatch about a huge projectile, possibly a battleship, approaching at high velocity, and how eventually the “High Commander” was roused from his noontime nap to address the issue. They get even quieter as they report the way Ruka, hearing that battle was approaching, made a dash for his evac pod without even taking the time to put his pants on.

And then they get extra quiet when they tell you that as the High Commander fled, his evac pod was suddenly flattened by a wall of stone and ice--the meteor into which the Boreas was lodged and frozen.

In the official story, Raku was honored for defeating the Boreas as it attempted to conquer the outpost, and the guys who were there are loyal enough to leave it at that. Anyway, it’s the discovery of the giant ice mecha that really matters, not the egos of Shogunate command.

They never determined where the chunk of rock and ice came from, nor how the Boreas came to be lodged in the crevices of the stone. However, it was clear that the Boreas had an incredible ability to withstand pressure and cold, as it somehow survived the trip through the stratosphere. Its shielding and pure mass made it an intimidating foe that would be tough to take down.

The discovery of the Boreas turned out to be a gold mine for the Shogunate. Its weapon systems and cold fusion power core turned out to be far superior to their previous models of ice mecha, and the precision of its targeting systems was unparalleled. They knew that if they could reconstruct these innovations, they’d be able to deliver a whole new class of destructive power.

Many pilots came to covet the Boreas for its sheer ability to deliver massive damage. It comes stock with twin Winter’s Grasp ice blasters, and as pilots learned more and more to master the Boreas’s adaptive control systems, those weapons would become feared across the galaxy for their ability to lock down and obliterate even the most heavily armed of mecha.

The interior design of the Boreas is as impressive as its fearsome exterior, with an array of complex controls and an innovative interface module that provides for extensive modifications in the cockpit and chassis. The analytics in the targeting systems are incredibly fast, providing an almost instantaneous feedback loop that allows the weapon systems to forgive pilot error and provide more accurate attacks.

The Meiji (although not Raku) are fortunate to have such a gift fall from the sky, and as they start moving the Boreas out into the battlefield, pilots everywhere might start running for cover. 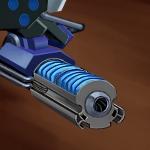 Once it gets hold of you, it won't let go.

Fires a liquid acid slurry that freezes enemy mechs and damages them as the frozen acid thaws.

Fires a liquid acid slurry that freezes enemy mechs and damages them as the frozen acid thaws.