A shrill and piercing squeal, a sharp crack, hiss, and then silence. The mining colony on Ferran ground to a halt as their latest deep-core drilling operation hit an unexpected obstruction, shattering the diamond nanorods in the primary rig like they were brittle twigs. Whatever they had hit was unlike anything they’d ever seen, and before long an extensive excavation of the surroundings was under way.

It took months to painstakingly uncover the area, and countless more drilling rigs were wrecked as the digging team found more and more of them: hundreds of strongly shielded, translucent stasis pods containing gargantuan Mecha littered the newly-unearthed ground for miles around.

It was clear early on that they were connected by some form of communication, if you can call it that. Contact with any one pod sent the whole field abuzz with energetic waves. The crack team of electromagnetic geeks hustled in from Novum Dolorum determined that the Mecha were somehow networked together in a hive mind state within the regulation network of the pods. An exciting discovery, to be sure, at least until the monsters started to awaken.

The mining colony was wiped out before an alarm could be raised. The Yallan Mecha were efficient at their job; you had to give them that. When command finally realized what had happened they called in the nearest reinforcements, a few squadrons of Jadoon posted at a nearby military outpost. These were fearsome Mecha with tough veteran pilots. As the Jadoon squads arrived on Ferran, they established a quick perimeter and moved in to face whatever menace had obliterated the colony.

Not a single shot was fired. As soon as the Jadoon came within sensor range of the Yallan ranks, the Jadoon rigs promptly stopped responding to their pilot’s commands. The Yallan responded in kind and immediately powered down their weapons. It was as if they recognized one another and refused to fight an old friend. The electro-magnetic waves that connected the Yallan passed back and forth between the Jadoon as well, as the whole battlefield thrummed in energetic symphony. It was like the reunion of long-lost family. The battle for Ferran was over, and the Yallan had found their new masters.

The Yallan is of the Jadoon’s family of semi-organic Mecha; they are alive in a manner of speaking, but not as we traditionally understand the term. They share many of the Jadoon’s core traits, like the central eye, back cannons, and a swooping back-armored carapace. The Yallan’s central optics are larger than the Jadoon’s, and are able to perceive all known specturms of light and energy emanations, utilizing high-grade multi-wave sensors woven throughout the mechanism. It is believed that the Yallan’s optics are centrally responsible for the energetic connection that passes between the Mecha, but this particular bit of their inner workings remains a mystery. || The Yallan packs more Vanadium “nerve bundles” in their musculature, making them more effective at response and targeting than the Jadoon. They implement the same basic setup for the back cannons, with dedicated power cores for each weapon.

However, the Yallan uses its engine slots purely for weapon power, sacrificing speed for an incredible capacity to deliver damage. While the Jadoon relies on lasers, the Yallan concentrates on fire, utilizing a complex mixture of chemical secretion and projection to ignite the world around it in flames.

The Yallan also features multiple oscillating kinetic barrier engines beneath its carapace, on either side of the central eye. These expanded shielding slots enable the Yallan to produce stronger shields than its little cousin (although they share the vulnerability to missiles), and excess shield slots in the Yellan provide the potential for an even tougher nut to crack.

In a bygone era, ancient warlords might have thought of the Jadoon as an infantry unit and the Yallan as a tank division. Where the Jadoon might charge ahead, fleet of foot and quick to swarm the field, the Yallan would roll in, slow, sturdy, and packing the shields and firepower to smash enemy defenses all to hell. Where the Jadoon might serve best in guerilla-style tactics, the Yallan is ready for a head-on assault. It is not difficult to imagine how a squad of mixed Jadoon and Yallan Mecha could realistically attack and subjugate large population centers.

The seemingly natural compatibility of the two Mecha leads to an exciting question. What are the origins of this family of Mechs? We may have no answer yet, but one things is certain. We’re going to need more drill bits. 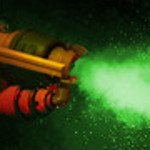 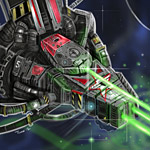 Hyped and amped, this laser recharges with radiation from nearby suns. The chaos of this fuel source wreaks havoc on enemy electronics.

Hyped and amped, this laser recharges with radiation from nearby suns. The chaos of this fuel source wreaks havoc on enemy electronics.