Imagined by General Otto Von Bismark and technical creation of Dr. Drake, the Anubis was designed and created as a wonder weapon for the Final Reich in its plan for galactic conquest.

When Otto Von Bismark was conscripted into Drochah's League of Ages he was already schooled in armored combat. Bismark recalled his experience with Earth's first mechanized vehicles, and extended their principals into his vision of the ultimate fighting vehicle.

This mecha superficially resembles a Boreas, but it is covered in a poly ceramic armor overlay to give it the mostly black with white appearance. Underneath this coating is dark matter armor held in place by Unstable Matter engines. Due to its size, the Anubis can also house a few extra engine slots. Sometimes said to be a "slow" mecha, but for its size, but actually right in line with existing BMF mecha available today.

The Unstable Matter engines and their area of effect is also how this machine is able to move with something as dense as dark matter attached to it. The engines disrupt the physical weight and mass of items held within their envelope. The internal “skeleton” of the mecha is high grade Ferronite giving it an ability to take massive amounts of damage on top of what the armor provides.

Bismark desired a mecha designed to survive a modern "No man's land" from the lessons learned on battlefields through time. He ordered heavy shielding against lasers (the equivalent of the infantry rifle) and flame weapons, still feared on the modern battlefield. Bismarck also required that the mech be protected from the "Artillery" of mecha combat via shielding against area of effect weaponry.

To fill this need, Dr Drake designed the dark matter plating to absorb and dissipate wide area damage directed at the mecha. The constant field produced by the unstable matter engines disrupt incoming laser fire by actually breaking apart the solid light coming at it, as well as disrupting the heat from a flame weapon leading to increased shielding from lasers and fire weapons; but their main effect is fantastic shielding against Fork, Trample, and Splash damage, which are often found in artillery and missiles.

Ironically the very weapons it is designed to survive is what gives it it's own offensive punch. Missiles. Lots of missiles. When shown the initial design, Bismark is reported to have simply commented "More missiles" Upon seeing an updated version, he is said to have shouted "More! I want more missiles! As many as you can fit on the monster! And make them big ones!"

The unstable matter engines produce a massive field envelope which further amplify its damage dealing ability with missiles. When the missiles launch they are somewhat lighter than the atmosphere around them, and by the time they leave this envelope they are flying at near supersonic speeds. The result of the collision of these projectiles upon an intended target are devastating. The impact is similar to a buckshot round from a sawed off shotgun of old earth at close range. The target is instantly riddled with shrapnel and reduced to a mess of holes instantly.

For upgraded units, Drake refined the Parallax Targeting System first installed on the Torrent by enhancing its multi-vector targeting and tracking, enabling it to distribute its missile salvos either across multiple targets or angle them into striking a single target from multiple directions. This increasing the missiles' hitting power up to 6X. By mid-stage prototype testing, the refined system was already enabling the design to cripple or kill huge but unshielded mecha in one strike by sheer force of damage alone, a feat not accomplished by even similar weight or size units without enhancements to their onboard technology beyond the base targeting system itself.

Once Dr. Drake had finished the test units that turned General Bismark's dream into reality, mass production began, and hundreds of thousands were turned out over a period of months.

It didn't take long for other powers to gain possession of examples of the mecha, once battle was engaged throughout the galaxy against the Final Reich. It also did not take long for the reverse engineering on the mecha to take place. Now, this master work of German engineering and death dealing mecha technology, is one of the most desired artillery mecha in the entire galactic sphere. A mechanized twist on medieval engineering. Better duck and cover. 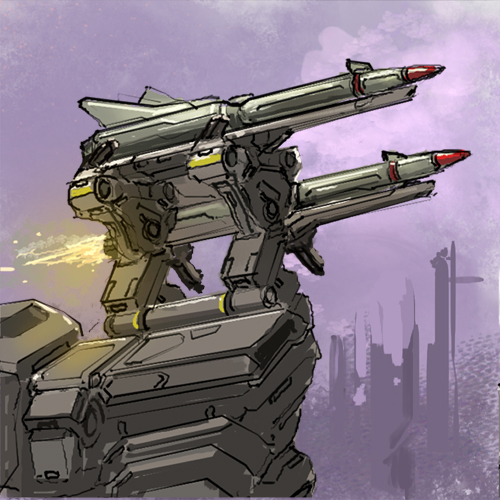 Powerful magnets inside the missiles draw them to their target and often cause damage to nearby mechs.

Powerful magnets inside the missiles draw them to their target and often cause damage to nearby mechs. 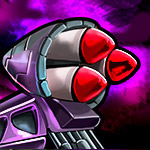 Right before impact, the propulsion system of this missile is absolutely deafening.