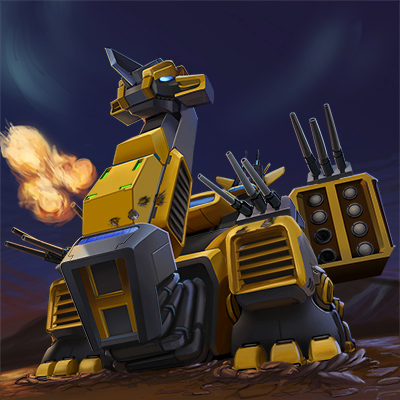 Years after the initial Aspis and Ignis mecha were excavated from Yomi, another of Drochah’s designs has emerged onto the scene. A Shogunate spy named Tanzan Kimura managed to infiltrate the mining operation that discovered the Aspis. Kimura spent weeks hidden within the shadows of the excavation site, searching for valuable information. In the end, Kimura emerged from the mines with only a set of blueprints, ashamed that he had failed to gather anything of value. Fortunately for the Shogunate, those blueprints would lead them to develop the largest mecha ever seen.

The Apatotron, as the Shogunate R&D team eventually named it, had yet to be built. Drochah had completed the plans but hadn’t finalized the manufacturing processes. The plans were clear enough; though they could not read much of Drochah’s writing, they were able to follow his schematics and approximate the specs.

It appeared that by studying the ancient sauropod Apatosaurus, Drochah had developed an innovative structural matrix in the legs and core of the mecha that supported more weight--and thus more armor and firepower--than ever before conceived in a mech. The result was a mecha with unparalleled size and strength, with weapons and armor unmatched anywhere on the battlefield. The Apatotron would tower above its enemies, delivering devastating missile and projectile attacks while withstanding fire from heavy guns throughout prolonged battles.

Some of the Shogunate engineers wagered that the Apatotron would not be able to support its own weight or maneuver well enough to be a valuable asset in combat. They bet that once built, the mecha would simply collapse under its own weight. However, millions of years of evolutionary design proved them all wrong. The extended whip-like tail helped to counterbalance the heavy front end, and while the mecha certainly was not fast, it could maneuver well enough. Drochah’s designs worked, and the completed Apatotron cast a long and dark shadow. It was a fearsome sight to behold.

The production and control of same was to be the Shogunate's finest hour. With a monopoly on the largest and most technologically advanced war machines the military of the Emperor would be unstoppable. Unfortunately for them, the Shogunate's own greed and lust for power was their own downfall. While Toshiko's advise and expertise were indispensable in the production of the Apatotron when the first units began to roll off the assembly lines, Toshiko was informed that as she was not a member of the Emperor's armed forces she would not be receiving one of her own in payment as promised. She exacted her revenge by publishing the schematics and blueprints on public message boards across the known galaxy breaking the Shogunate's stranglehold on the Apatotron's production

The Targeting system of Drochah's final design, or possibly just the latest discovered design is as cutting edge as the rest of the Apatotron. Relying heavily on the Forerunner technology of time displacement, the Apatotron uses multiple attacks to overwhelm its foes. Fork and Wide-Fork are used to their full advantage to eliminate whole squadrons of approaching mecha. The Splash area effect found on many missile system is also enhanced greatly by Forerunner technology.

Projectile weapons continue to evolve and improve using Drochah's designs and implementing the little amount of Forerunner technology that can be replicated. The armor piercing Trample effect is elevated to unheard of levels by the fire control systems of the Apatotron. Predictive algorithm’s analyze targets for optimal placement of strikes that will penetrate completely through a target and still devastate any opponent beyond the original target. The same predictive algorithm’s using a variation of programming enable the pilot of the Apatotron to see/kill a target. Precision targeting is given a considerable amount of the processing capability of Apatotron A.I. And computers.

Another significant innovation was the placement of the cockpit. Since the mech’s core generated so much heat, the pilot is housed in the mecha’s head, placed atop a highly-articulated and agile neck. The height of the pilot’s vantage point provides additional ability to target and oversee the battlefield, aiding in multiple targeting, and precision strikes.

The primary weapon systems of the Apatotron consist of two devastating and complementary attacks. Its missile rack, Jurassic Thunder, delivers upon impact a series of sonic blasts that increase its already wide area of effect. The distinctive boom of the Jurassic Thunder was enough, in the mech’s earliest days, to send squadrons of smaller opponents fleeing for cover.

The mech’s cannon turrets, named Jurassic Storm, punch through lines of mecha to deliver damage deep into the enemy’s defenses. Developed as a siege weapon, the Apatotron cannons deliver sufficient firepower to rip through even the most heavily-armored opponents. The mech’s signature sonic blasts accompany the mortar fire of the Jurassic Storm as well. Mech designers will need to reconsider their armor design and placement, as these newest weapons in the field may be game-changers.

The combination of the two weapons systems deafen opponents with thunderous attacks that spread far and deep, allowing the Apatotron to present a massive area of effect and take out whole squadrons of enemy mecha singlehandedly.

It’s a shame for Drochah that he didn’t live to see his final creation finally completed and mauling lines of mecha throughout the galaxy. Then again, if Drochah had a weapon as formidable as the Apatotron, he may have won the day and enslaved us all. 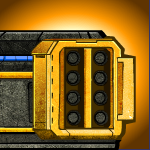 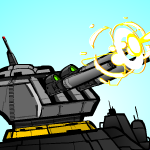