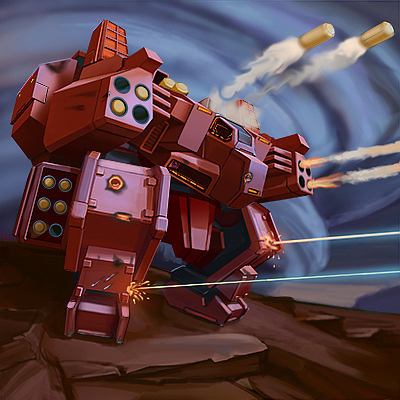 Watch out, mecha pilots. There’s a storm on the horizon.

An innovative power system enables the Typhoon mecha to bring massive size, armor, and firepower to bear without sacrificing too much of the maneuverability that pilots need to keep their mecha intact.

At the heart of the Typhoon mecha is the Storm Cell power system. It’s widely known that the greatest limitation on heavy mecha design has always been power distribution, with the slow speed and sluggish reactions of the heavier machines offsetting their advantages of armor and weapon load.

The designers of the Typhoon developed the Storm Cell system specifically to address this weakness. The massive internal spaces of the Typhoon’s hull nest Storm Cell power capacitor banks wide and deep leaving little room for custom engine slots. Instead, weapons, shields, and drivetrain in every section of the mecha draw directly from the Storm Cell capacitors, which are recharged from the central engines. As a result of this network of Storm Cells, the Typhoon’s weapon bays are literally crackling with power, fueling massive batteries of missile launchers and direct-fire weapons.

The reliance on the Storm Cell system allows the Typhoon to be more responsive, with a higher than average number of chassis slots for a machine of such massive size. These extra chassis slots naturally provide enhanced ability to dodge, and can be maxed out to display the Typhoon’s characteristic “dance moves” as it darts left and right to avoid volleys of enemy fire.

Given the characteristic overcharge of the Storm Cell powered launchers, missiles fired by the Typhoon enjoy a faster flight time and increased damage. In addition, these overcharged missiles can significantly disrupt enemy targeting systems when that crackling energy combines with the warhead damage.

The Storm Cell’s power is perhaps best demonstrated by the Typhoon’s shielding. Overlapping power fields from the Storm Cells provide additional protection from lasers, and as the field overlap builds, indirect damage effects are greatly reduced even before dedicated shield modules are mounted in its ample dedicated shield bays.

The impressive number of available cockpit and chassis slots allow pilots to tailor the Typhoon to their own fighting style, whether purely defensive, or using the huge reserves of Storm Cell energy to permit crippling lightning strikes and enhanced damage.

While enabling only a small number of engine slots even at the highest levels of development, the Storm Cell system continues to increase the mecha speed, missile performance and secondary effects long after many other machines are done developing.

The Typhoon was designed to stand in the midst of the storm and pound its opponents to scrap. Heavy armor, strong shields and (when properly equipped) surprising maneuverability make this mecha a storm upon the battlefield.

Test pilots called the experience “Riding the Storm” and longed for the unique experience of riding a hundred tons of mecha that dances in the heart of enemy fire, watching their enemies swept away under the deadly winds of her missile batteries. 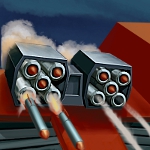